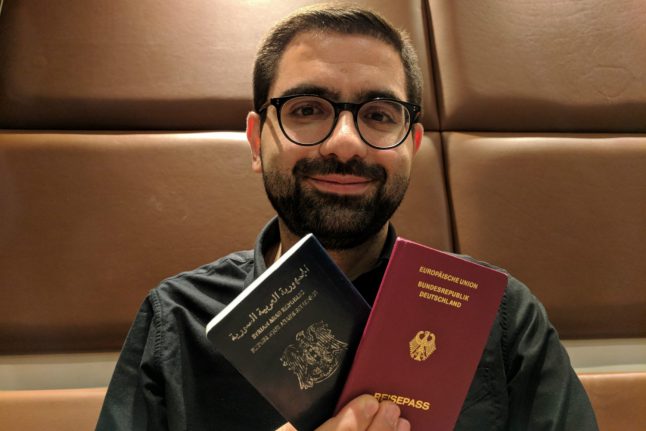 This is the first in a series of profiles exploring the experiences of people who have gained German citizenship and the impact it has had on their lives.

Samer Al-Hakim, a software engineer from Damascus, Syria, first came to Germany in 2009 to study for a master’s degree in telecommunications.

“Syria was safe back then,” the 32-year-old says. “I did not have a clue that a war was about to break out.”

At the time, Al-Hakim simply chose to come to Germany because of “the relatively low tuition fees in comparison to other developed states”.

But everything changed when civil war broke out in Syria in 2011, after which Al-Hakim was no longer able to return home.

READ ALSO: 'Paperwork was out of this world': the ups and downs of getting German citizenship

As the conflict escalated, Al-Hakim’s family were soon forced to flee Damascus in late 2012, relocating to other Arab states in the Gulf region.

Although they managed to escape the war, it was still difficult for Al-Hakim to visit his family as he had to go through a long visa process each time.

Soon after, a family tragedy made the already complicated situation all the more painful.

“My mother got really sick just a few months after fleeing Syria and passed away surprisingly in 2013,” he recalls. “I was able to travel to visit my family one last time about a month later.”

But then border controls in the Arab states grew increasingly stricter, in reaction to the influx of refugees from Syria, and soon Al-Hakim could not visit his loved ones at all.

“It was literally impossible for me to travel to see my family,” the software engineer says. “My visa applications were rejected multiple times even though I had a really good, stable job here and I had an unlimited residence permit in Germany.”

And it was equally difficult for his family to travel to Germany to see him.

“I was in fact isolated here by myself at a time when I needed to see my family the most. That affected my health and I was depressive for more than a year.”

“I am not the only one who suffered this way. I know many other Syrians here who cannot see their families because of visa issues as well. It's really heartbreaking.”

“Later I was admitted to hospital because of health issues. While I was there alone, I decided I did not want to give up.”

He realized that becoming a German citizen would give him the freedom to travel to see his siblings.

“I was not able to see my family for three years and this is why it was essential for me to get the German passport as soon as possible.”

In 2015, he went to the immigration authority in Nuremberg, informed them of his situation and asked when it would be possible for him to apply for citizenship.

People can usually apply after living in Germany for eight years, but he was advised that there are certain criteria that allow a person to apply a year or two earlier.

He was told that if he showed an integration course certificate, he would be eligible to apply after seven years.

“I could even apply after six years if I proved to authorities I am well integrated in the society, and this is exactly what I tried to do back then,” he says.

The 32-year-old describes how he took an extra language exam to prove he had C2 level German, meaning native-level – the normal test for applicants is B1, which is equivalent to intermediate.

He was also helped by the fact that he had a German university degree, an unlimited work-contract and was volunteering after work to help refugees.

“I submitted certificates that proved all of my activities in Germany along with my citizenship application,” Al-Hakim says. “Thankfully that resulted in a positive response from the authorities.”

Although he had to translate a huge number of documents into German, he saved time as he didn’t have to give up his Syrian citizenship.

“Syria does not allow its citizens to give up their citizenship. This is why the German law allows us to be dual citizens,” he explains.

He then had to wait two months to hear whether his application had been successful, but as soon as he received a letter of confirmation, the rest of the process was finished in a whirlwind four days, spurred on by the thought of finally visiting his family.

“I received the positive response on March 30th 2016. The next day, I went to the immigration authority to collect my citizenship certificate, after saying an official declaration out loud, and on April 1st I applied for an express German passport – one that would be issued only within four working days if you pay about €50 extra.”

Then finally, after years of waiting, Al-Hakim was able to book his flights to go and visit his family.

“When I was finally able to travel and see my siblings and my nephews, it was the biggest relief in my life,” he says.

Aside from giving him the freedom to travel in the Arabic Gulf states, Al-Hakim feels his German citizenship has had a number of other positive impacts on his life, including helping him to avoid the dangers of the war in his home country.

“I am still wanted for military service in Syria and to do that now would be like a death sentence for me,” he says. “So of course it makes a huge difference to have such a guarantee here.”

What’s more, gaining German citizenship has helped him to feel secure and at home in the country.

“Since I cannot go back to Syria anytime soon, it's great to have a feeling of belonging to a safe country where my rights are protected.”

Read the next article in this series: 'We reclaimed what was taken from my Jewish grandparents – their German citizenship'