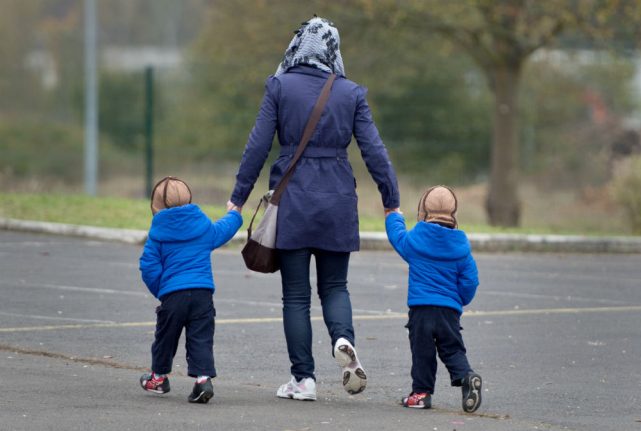 A woman and her children in front of a primary school for refugees in Gießen, Hesse. Photo: DPA

The figures are a far cry from the record 890,000 arrivals registered in 2015 after Merkel opened the country's borders to those fleeing conflict at the height of Europe's migrant crisis – a decision that polarized the country.

Interior Minister Thomas de Maiziere said the number of newcomers filing asylum requests had “dropped significantly” in 2017 to 186,644, after already falling to some 280,000 the year before.

Refugees from war-torn Syria made up the largest group of asylum seekers in 2017 with more than 47,000 arrivals, followed by some 21,000 migrants from Iraq and over 12,000 from Afghanistan, according to the ministry.

The 2017 data will make welcome reading for Merkel, as it falls below the maximum intake of 200,000 refugees a year sought by her conservative CSU sister party.

Their insistence on a migration cap has been a key stumbling block in tortuous talks between Merkel's centre-right CDU/CSU bloc and the centre-left Social Democrats (SDP) on forming another coalition government.

A preliminary agreement reached by the parties last Friday mentioned an upper limit of around 200,000, angering many in the SPD base.

Germany's migrant arrivals have slowed sharply since the 2015 influx after several Balkans transit countries shuttered their borders and the EU in 2016 reached a deal with Turkey to stop crossings to Greek islands.

Initially overwhelmed by the flood of newcomers, De Maiziere said German authorities have made significant progress in processing asylum requests.

“The federal office for migration and refugees is no longer grappling with the consequences of the crisis,” De Maiziere told reporters in Berlin.

As well as being allowed to access mobile phone data, German authorities have introduced speech recognition tests to determine an asylum seeker's dialect and accent in case of doubts about their country of origin.

“This is a big win for Germany's security,” De Maiziere said.

Nearly four months on, Germany is still without a new government.