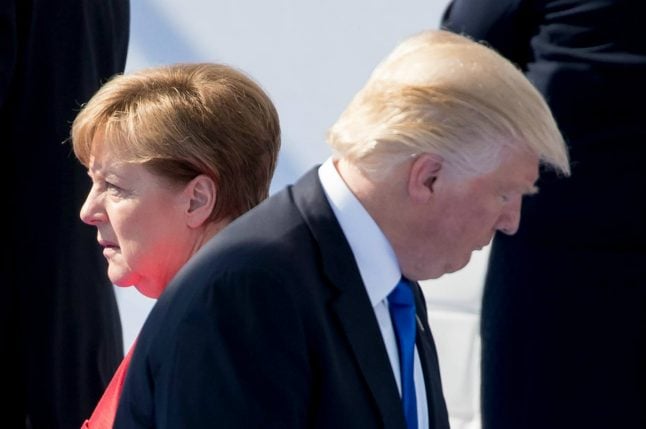 Politicians in Germany generally keep quiet on the domestic politics of other states. But as Trump’s run for public office became ever more serious, senior politicians in Berlin couldn’t stop themselves expressing their distaste.

While Chancellor Angela Merkel kept quiet on the rise of the real estate mogul, it is an open secret that she would have preferred to have met another female in the Oval Office after the November 2016 election.

Top of the list of German concerns about a Trump administration were his insinuations that the US would no longer automatically come to the defence of Europe in the event of an attack on a NATO member. And the fact that he repeatedly barracked Germany for its trade surplus with the US in his first few weeks in office did nothing to slow pulses on the Spree.

A year after Trump took office, the dust has settled somewhat. But, with the US still not having an ambassador in Berlin, confusion remains over how exactly he wants to deal with Germany.

“Policy makers are just as bewildered now as they were 12 months ago,” Dr. Michael Wohlgemuth, a foreign policy expert at Open Europe Berlin, told The Local. “There is still confusion about what exactly he is up to.”

What seems clear on the European side though is that “transatlantic relations have lost their self-evident raison d'être,” argues Wohlgemuth.

“In Europe there is a realization that we cannot rely on our US partner anymore. One beneficial effect has been that this has urged Europeans to get their act together.”

Wohlgemuth points to a renewed impetus in EU common defence plans which have taken place over the past 12 months, with Germany as one of the main driving forces. On the trade front, meanwhile, Trump’s lack of interest in completing the TTIP free trade agreement with the EU has pushed Germany and its EU partners to look to strengthen trade ties elsewhere, including with countries such as Canada and Japan.

Kristine Berzina, transatlantic fellow at the German Marshall Fund, tells The Local that “there has certainly been a big change in relations since the inauguration. The shift could be seen as seismic.”

“[Barack] Obama and Merkel had a productive and open relationship while they were both in office which was based on mutual cooperation. Trump has pitted US interests against German ones,” she says. “In response Merkel has also changed her tone.”

She cautions against just seeing bilateral relations solely through the lens of the White House and the Chancellory, though.

“Below the executive level a lot of productive cooperation continues as it had done before. This is at all levels of government, on a city-to-city level, in business and in tourism.”

German concerns over the US commitment to NATO in particular have been eased to some extent over the past year, Berzina explains.

“Security cooperation is continuing much as it did before. The Germans have a lot of trust in [US Defence Secretary] Jim Mattis, who is a very traditional figure on security. Every single US defence action that has been taken over the past year has been in support of European security.”

The biggest division between the two countries, Berzina says, has been on climate change. Trump’s decision to withdraw the US from the Paris climate deal was “a big split” from the Germans, she says.

Berzina does however detect a slowing down of Trump’s war of words with Germany in recent months. For instance he has been much more subdued in his criticism of the German trade surplus.

“In Washington the rhetoric has been moderated. But it could just be that he has been distracted from Europe recently. We will know in the summer when he is set to travel over again.”

Fundamentally, nobody knows how strong or enduring any of Trump’s opinions are, Berzina argues. This is why the most important lesson Germany has learnt over the last 12 months is that “it is really important to maintain close ties to the [more predictable] people who work for him.”