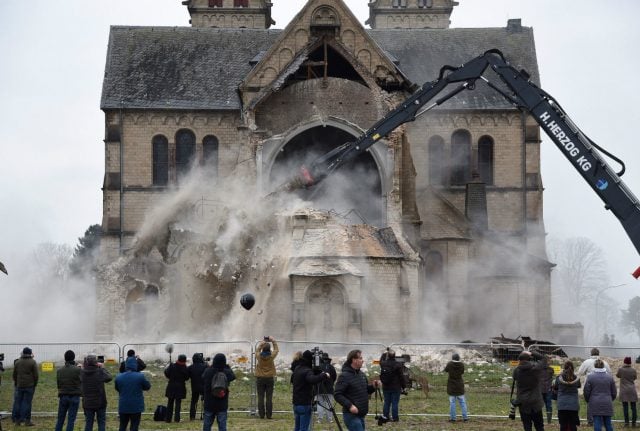 Built in large part by local people and consecrated in 1891, St Lambertus church in Immerath, North Rhine-Westphalia state, was ripped down by diggers' hydraulic arms on Monday and Tuesday, leaving a heap of rubble where the neo-Roman nave and twin towers once stood.

Police brought in reinforcements Monday to manage a crowd of protesters who held up the demolition for five hours, local newspaper Rheinische Post reported.

“Those who destroy culture destroy people too,” a banner held up by Greenpeace demonstrators read.

Immerath and its church have been doomed since 2013, when Germany's constitutional court found that there was an overwhelming public interest in allowing energy firm RWE to expand its nearby Garzweiler open-cast brown coal mine.

Almost all the 900 villagers have long since quit their homes, among a total of 7,900 people from the region making way for the mine, while the Catholic church was deconsecrated in preparation for its destruction.

The demolition has drawn attention to the nation's mining of brown coal, as calls grow to reduce greenhouse emissions by ending use of the cheap but polluting fuel.

Germany has massively expanded renewable energy in recent years, part of its “energy transition” away from fossil fuels and nuclear power.

Environmentalists point out that at times of peak production energy firms now pay neighbouring countries to take surpluses generated from coal off their hands.

But power companies argue they need coal capacity as a stopgap for times when output from solar and wind is low.

Meanwhile, politicians are loath to impose an end to coal, an industry that still employed almost 20,000 miners in 2015 according to official figures.

As the towers fell in Immerath, talks between Chancellor Angela Merkel's conservatives and their historic rivals the Social Democrats were getting underway on renewing a left-right “grand coalition” that has ruled since 2013.

One of the first proposals to leak from the talks was giving up Germany's 2020 goal of cutting carbon dioxide emissions by 40 percent compared with 1990's level.

“Who is fighting for an exit from coal or a real reduction in CO2 emissions? No-one that I know of,” prominent Greens party figure Robert Habeck told news agency DPA.