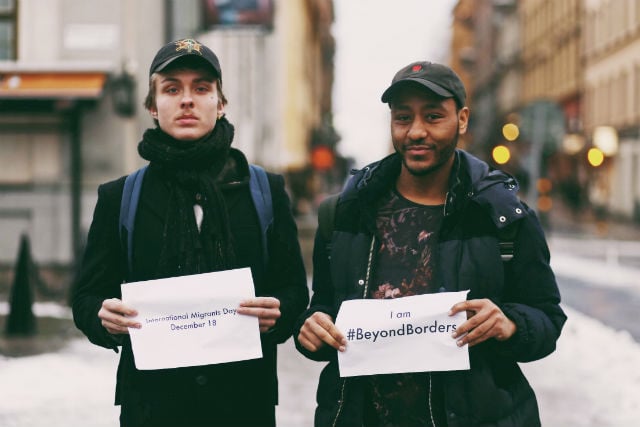 It might not be a day you had marked in your calendar, but it should be.

Now more than ever it's important to promote acceptance of people from different backgrounds. Particularly in Sweden, where the population gets more diverse every day.

To raise awareness of International Migrants Day, the team at Beyond Borders — a new online lifestyle magazine launched by Swedish tech company Rebtel — hit the streets of Sweden's capital to chat with Stockholmers about where they come from.

“We think being a migrant is something worth celebrating,” says Beyond Borders editor Solveig Rundquist (an immigrant herself) of the video. “After all, when it comes down to it, migrant just means ‘mover’. We’re movers and shakers who get things done. We should reclaim the word – and celebrate this day.”

Watch the video to find out just how many randomly-picked residents actually come from a foreign background. What they discovered might surprise you!

Rebtel is one of Stockholm’s most international companies, with over 35 nationalities on its workforce of about 85 people. Its new website, Beyond Borders, is described as an “online magazine for all those who identify with the reality of a life beyond arbitrary lines drawn on a map – and all the struggles that come with it”.

This article was produced by The Local Client Studio and sponsored by Rebtel.

If you already call a European country home, how are your rights affected after Brexit? Photo: AFP
Question: I now have residency status in Italy, but I was wondering, does that allow me free movement within Europe or am I still bound by the conditions for all UK citizens?

This question is one of several similar queries The Local has received recently, as British nationals get to grips with new restrictions on travel and life in Europe.

EU membership and freedom of movement had previously allowed Britons to move abroad to live, work, and retire without the need for visas.

This had also allowed British nationals to then move freely from one EU member state to another.

But that is no longer the case, after British PM Boris Johnson and his government decided to end freedom of movement, including onward from one EU country to another.

Simply put, this means a British national wanting to move from one EU country to another would now need to apply for a long-stay or residency visa – in exactly the same way as if they were moving from the UK to the EU for the first time.

This is because rules are based on your citizenship, rather than on the country you have residency in.

So moving from one EU country to another, while still possible, is now more complicated.

READER QUESTION: Can Brits stay more than 90 days in the EU if they have a spouse with an EU passport?

For example, a British citizen now resident in France would not be able to move to Germany without going through the process for visas, because the freedom they used to leave the UK in the first place has ended.

Each EU country will have its own requirements for new residents. Italy, for example, has from January 1st 2021 introduced a new long-stay visa for British nationals hoping to move to the country.

No visa will be needed to stay in the EU or the wider Schengen zone for under 90 days in every 180 day period, but anyone planning a longer stay, or to do paid work, will have to apply for one.