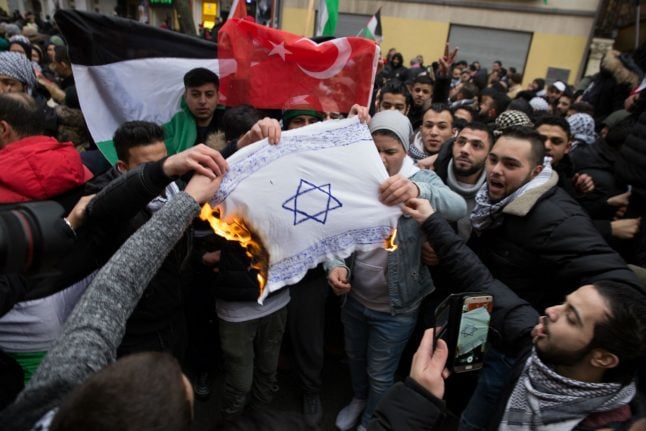 The CDU politician told Bild on Monday that Germany is “connected to the state of Israel and all people of Jewish faith in a very particular way”.

“We do not accept it when Jews or the State of Israel are insulted in this disgraceful way,” he said.

Israeli flags were burned at the Brandenburg Gate on Friday during a pro-Palestinian demonstration against US President Donald Trump's recognition of Jerusalem as the capital of Israel. Ten people were arrested and investigations were launched into the violation of a foreign state’s sovereign signs.

On Sunday evening, an Israeli flag was also burned on the edge of a protest march from Berlin’s Neukölln district to Kreuzberg, which was attended by around 2,500 demonstrators.

Government spokesman Steffen Seibert told reporters that the government strongly condemned protests in German cities where “hatred” of Israel and Jews was expressed.

“At certain rallies over the weekend, slogans were chanted, Israeli flags were burned and slander against the state of Israel and Jews in general were spread which were shameful,” Seibert said.

“One has to be ashamed when hatred of Jews is put on display so openly on the streets of German cities.”

Seibert noted that Berlin had a “particular responsibility toward Israel and Jewish people in general” because Nazi Germany slaughtered six million Jews in the Holocaust.

He said that while Germany protected a constitutional right to free speech and assembly, that freedom did not cover incitement of racial hatred or violence.

“It is important that we continue to stand up to all of that,” he said.

Last week Trump broke with decades of US foreign policy by recognizing Jerusalem as the Israeli capital and announcing that the US embassy would be moved there from Tel Aviv.

The German government said it did not support the decision, saying the “status of Jerusalem can only be negotiated within the framework of a two-state solution”, between Israel and the Palestinians.

German foreign minister Sigmar Gabriel, for his part, said he feared Trump's decision would lead to a “new escalation in the conflict between Israel and the Palestinians”.

The decision will likely throw “fuel on the fire”, he told public broadcaster ARD.