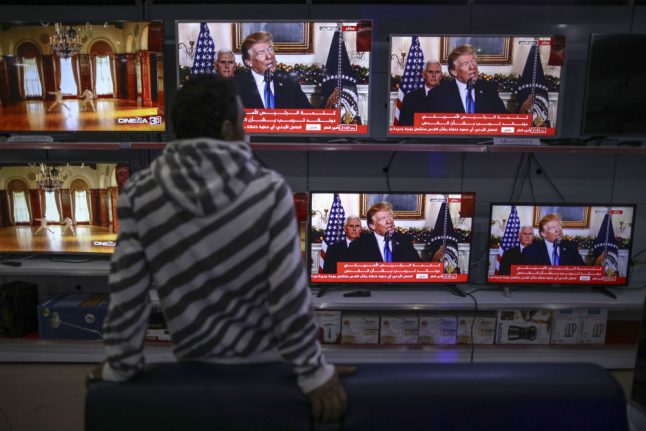 A Palestinian man watching a TV broadcast of US President Donald Trump on December 6th in Gaza. Photo: DPA.

The German government “does not support this position because the status of Jerusalem can only be negotiated within the framework of a two-state solution,” spokesman Steffen Seibert wrote on Twitter.

German foreign minister Sigmar Gabriel, for his part, said he feared Trump's decision would lead to a “new escalation in the conflict between Israel and the Palestinians”.

The decision will likely throw “fuel on the fire”, he told public broadcaster ARD.

“We hope that (our) worries can be… calmed. But this about face is already a big problem.”

Trump's decision to recognize Jerusalem as the capital, which marks a major departure from decades of American diplomacy, prompted a wave of condemnations on a global scale.

The EU expressed its concern about the impact the decision could have on the peace process.

French President Emmanuel Macron called Trump's announcement regrettable and that his country did not support it.

British Prime Minister Theresa May spoke out in favour of clarifying the status of Jerusalem under an agreement between Israel and the Palestinians and a two-state solution.

China and Russia warned of an increase in tensions in the Middle East.