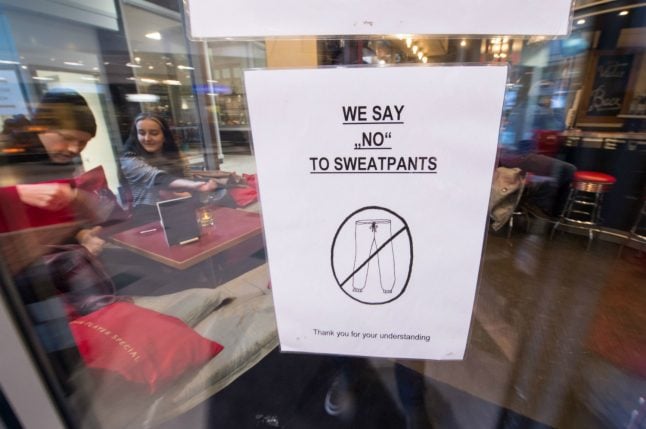 A small sign in a cafe window has sparked nationwide discussion in Germany over the question, “Do sweatpants belong in cafes or not?”, the Stuttgarter Nachrichten (StN) reports.

Stefan Gauß, owner of the Stuttgart cafe 'Le Theatre' in the city centre, has spoken out against the clothing item. His notice with the words, “We say 'no' to sweatpants” has had a polarising effect.

Gauß reserves the right to deny service to anyone wearing the offending clothing item. But bearing in mind the current 'Athleisure' and 'Sportsluxe' trends, his ban doesn't extend to all forms of sweatpants as he feels certain kinds of these could actually look quite stylish.

“I'm more concerned with a well-groomed appearance, but unwashed trousers with baggy knees are not suitable for a cafe.” Gauß said in defence of his fashion statement,adding that “some people just grab anything from the closet.”

A total prohibition was not what he had in mind. “But I will advise guests who have a terribly shabby look that on their next visit they should wear something more appropriate.”

As of yet, he has not rejected or thrown anyone out.

According to StN, others on the Stuttgart gastro-scene have a rather different opinion on a sweatpants ban.

“We find it unnecessary to enforce a dress code onto our customers,” says Jonas Reifferscheidt, a staff member of Cafe Moulu in Stuttgart West. “We don't want any kind of uniform in our cafe.”

Reifferscheidt feels everyone should come to the cafe dressed in clothes they like and feel comfortable in. People can even come in swimming trunks if they want.

Christian Rösslein, managing director of Cafe Königsbau wouldn't go as far as to enforce a general ban on sweatpants.

“Everyone should know themselves how to dress properly to go out into the city,” he told StN.

There are one or two rules regarding minimum amounts of clothing at the cafe though as, “in summer there are occasionally guests who sunbathe on the terrace in a bra or bikini.” In which case the team at Cafe Königsbau advise these clothing minimalists to “go home and put some clothes on.”

For Remo Heine, owner of Grand Cafe Planie, the question is irrelevant.

Heine is of the opinion that, if the staff become casual, the clientele soon follow suit. “The clientele is always dependent on the staff and the service. What goes around, comes around.”

“We are a classic cafe with our own patisserie. The issue in question isn't a problem for us as we have different customers from Cafe 'Le Theatre',” Heine told StN.