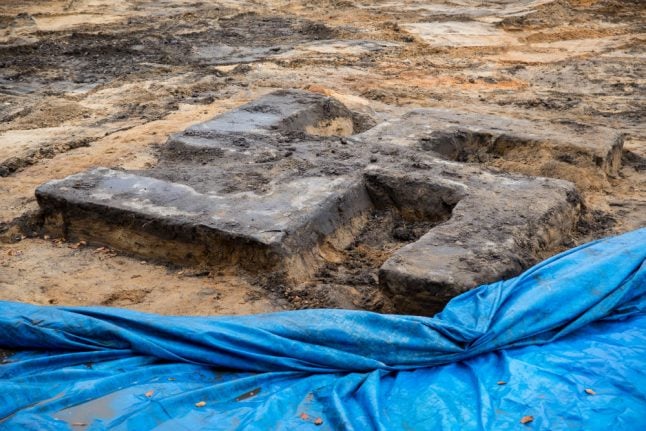 The massive swastika discovered by an excavator in Hamburg. Photo: DPA.

The excavator had been digging to create a foundation for new changing rooms on sports grounds in an eastern district of Hamburg when the machine suddenly hit something solid, chairman of the Billstedt-Horn sports club, Joachim Schirmer, said on Tuesday.

That something turned out to be a huge swastika made of concrete about 40 centimetres underground, he added.

After Bild newspaper initially reported the discovery on Friday, mayor of Hamburg’s central neighbourhood Falko Droßmann went to the sports field on Monday to see the find for himself.

According to the report, the Social Democrat (SPD) politician immediately took action; the office for the protection of historical monuments was informed and the decision for the swastika to be removed as soon as possible was made.

Due to its massive size and weight, the excavator was not able to move it. If it is to be removed, it may have to be destroyed using a jackhammer.

But how exactly did the giant symbol of National Socialism end up in a random field in the Hanseatic city in the first place?

It is not completely clear how it got up there, but according to Schirmer, there used to be a large monument on the site that was demolished decades ago.

The Nazi monument that previously stood there was filled with sand after the war, reports Die Welt.

In the meantime, for members at the club which was suddenly brought into the limelight by the discovery, “sports activities will continue as normal,” said Schirmer.