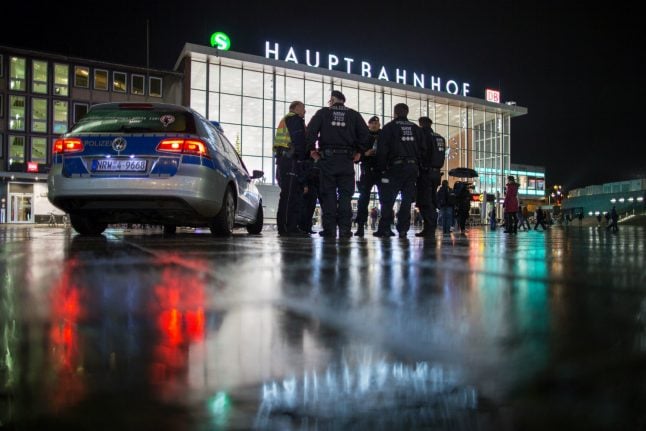 “I don’t think police have lost control. Even in further out areas with a bad reputation, I’ve never heard of any no-go areas,” Jana Gibhardt-Engle tells The Local.

Gibhardt Engle moved to Cologne 19 years ago and says she has never felt unsafe walking around the city at night, or attending large events such as carnival and gay pride.

The 38-year-old was responding to comments made in October by Andreas Hupke, mayor of Cologne's central Innenstadt district, who accused police of “giving up control” of Ebertplatz, a busy traffic hub with a reputation for drug dealing and violence.

With police statistics showing drug-related crime at its highest rate in a decade, and a rise in violent crime of 3.6 percent from 2015 to 2016, a heated debate continues over whether crime in Germany's fourth city is becoming unmanageable.

Crime in Cologne “definitely has gotten worse since the extreme influx of immigrants” to parts of the city, says Gina McAnally, a finance professional who moved to the city in 2009.

“Obviously drunk people and aggressive behaviour” now put her off attending crowded events, while she complains that her neighbourhood “feels like a mistreated stepchild at times – there is not enough money going towards safety, education and generally increasing livability.”

Police have “continually had their budgets slashed and there just aren't enough of them to go around and handle all the hot spots,” she says.

An underpass on the edge of Ebertplatz. Photo: Wikipemedia Commons

Nazmul Huq Russell, a PhD researcher who, like McAnally, lives in the eastern Kalk district, says he and his wife now feel less safe walking through the streets than they did when they first moved to the neighbourhood.

His wife has been the victim of verbal abuse on the streets, and he has had trouble with drug dealers. One time a drug dealer “approached me to sell drugs, when I asked them not to disturb me, they were furious and started heated arguments,” he relates.

Russell believes the root of the problem is marginalization. Many of the dealers are “immigrants, not-so-educated, and don't know the language. Therefore, they find it difficult to get work and they become part of local groups of petty crime,” he says.

Concerns about safety in Cologne are not universal, though. Miguel Lopes, an engineer who has lived in the city for the past few years, hasn't felt any significant change in crime levels.

“From the places I know, I can’t really tell you about one that’s totally unsafe,” he says. “In Cologne, the stuff that you usually have to worry about is more like pick pocketing and that’s mostly in the touristy areas”.

For Jana Gibhardt-Engle, fears about crime are a result of a lack of affordable housing, which she claims is fuelling resentment of immigrants.

“Because of gentrification it is very difficult to find housing in Cologne, especially at the lower end.”

She brushes off recent headlines about Ebertplatz, saying the square was always a centre of drug dealing.

'Ebertplatz was normal before'

Estefanía Escobar-Kölle, a resident of the now notorious hot spot of Ebertplatz, tells a different story.

“I moved to Ebertplatz around three years ago and the square was a normal place then. But in the last year and a half things started to change and now it's a difficult place,” she says.

With its underpasses, dark corners and lack of lighting, Ebertplatz is a nightmare for police to control. City Director Stephan Keller recently stated that “from a crime prevention standpoint, this kind of square would never, under any circumstances, have been built today.”
Escobar-Kölle says she used to feel uncomfortable crossing the square, as there are a large number of not only drug dealers, but drug users, as well as “different groups fighting and shouting”. She now avoids it entirely after a young man was stabbed to death there in October.

Police in patrolling the square 4 days after the knife attack. Photo: DPA

Residents of the square have demanded from local authorities that they provide a permanent police presence. In the short term, better lighting has been commissioned for the underpasses, while police president Uwe Jacob has responded by announcing a plan to increase the police presence there, Focus reports.

But Escobar-Kölle doubts whether the police have the capacity to cope with the problem.

Authorities are “trying to be as present as possible in the city and in troubled areas” and “simply can't tackle all issues at the same time due to a lack of resources, manpower and government funding,” she says.