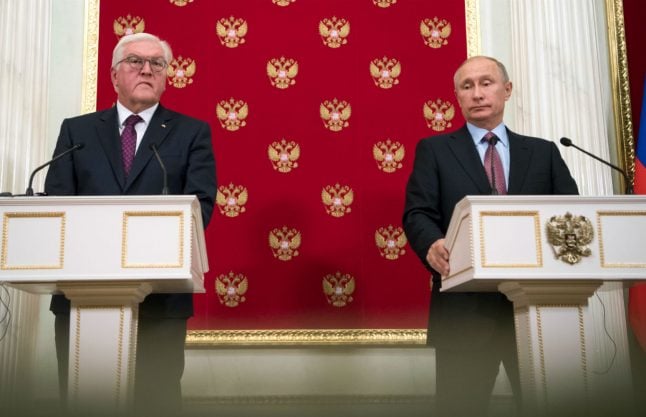 The first visit by a German president to Russia since 2010 comes as ties between the two countries remain strained over Russia's annexation of Crimea in 2014 and the subsequent uprising in eastern Ukraine that the West claims is backed by Moscow.

Steinmeier is a former foreign minister who was actively engaged in Germany's efforts to mediate the Ukraine crisis and has long called for engaging Russia.

“We both believe that the current state of affairs cannot satisfy us and should not satisfy us,” Steinmeier said following talks with Putin in comments translated into Russian.

“We are far from (having) normal ties, open wounds are still out there, there are unresolved issues, first and foremost it concerns the takeover of Crimea and the conflict in eastern Ukraine, which are a burden and continue to be a burden for our ties.”

Putin for his part said Moscow was ready to develop ties with Germany, adding that German businesses were interested in expanding their footprint in Russia.

“Despite some certain political difficulties Russian-German ties are not at a standstill,” he added.

Earlier Wednesday Steinmeier spoke with former Soviet president Mikhail Gorbachev, 86, soliciting his advice on how to improve ties between the two countries.

“He told me: 'The only thing that helps is to keep talking – even about difficult issues',” Steinmeier told journalists after the hour-long meeting.

“I come during times in which German-Russian relations have become difficult,” Steinmeier said.

“I see it as my responsibility to contribute to make sure that this doesn't stay this way forever.”

Steinmeier also visited Russia's top rights group Memorial and attended a ceremony for the Russian state's return of a cathedral building to the Protestant church.

He praised the handover of the cathedral, which was seized by the Soviets in 1938, and said he hoped that the church would continue to serve as a “place of encounter” between Orthodox and Lutheran Christians as well as Russians and Germans.