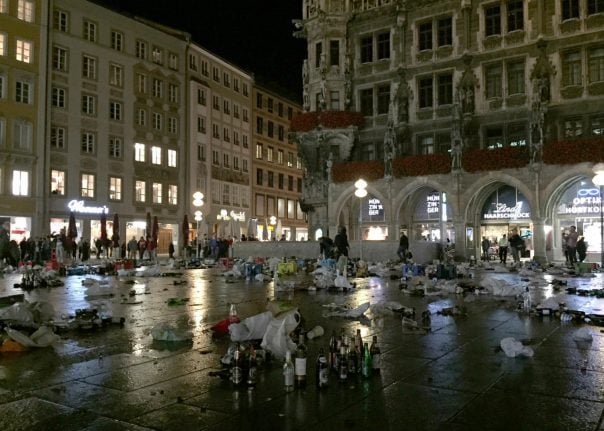 Although the Glaswegians later lost the game against Bayern-Munich 3-0, nothing could stop them from partying in Munich's Marienplatz and making quite a mess of it.

The city's central square was filled with football fans wearing white and green on Wednesday afternoon. The police had predicted 10,000 scots would descend on Munich for the game, reported the Suddeutsche Zeitung, but it is estimated that only half the fans actually had tickets. The rest continued to celebrate on the streets while the match continued.

When the party ended on Wednesday evening, the fans left all their rubbish on the square, including beer and wine bottles, leftover food and shards of glass.

Locals were very disgruntled to deal with all the rubbish, as well as the loud chanting and hold-ups on public transport.

A police spokesperson told the Suddeutsche Zeitung “that is an unusual amount of rubbish!”, adding that there had been a lot of people visiting Munich for the match.

There was no animosity between the two teams after the mess, however, as Bayern Munich tweeted at Celtic thanking them for the fantastic atmosphere.

Thanks for making it a fantastic atmosphere, Bhoys! ?

Wishing everyone connected with @celticfc a safe journey home ?