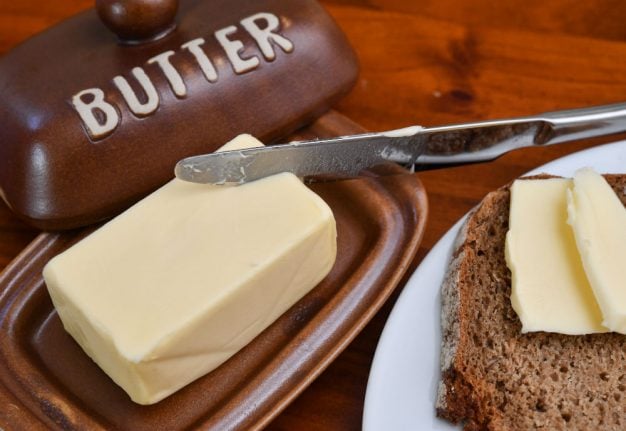 Anyone who has recently picked up a block of butter in the dairy aisle at a supermarket in Germany will have likely noticed a dramatic increase in its price.

In the month of September, the price of butter reached a historic high, rising more sharply than at any time in the past 26 years, according to a statement by the Federal Statistical Office (Destatis) on Monday – which also happens to be World Food Day.

At the beginning of last month, a 250 gram block of butter at discount supermarkets in Germany reached a peak cost of €1.99. Data reveal that this was the food product’s sharpest price increase in a single month since 1991. In April, a 250 gram pack of butter still cost €1.19 euros.

Prices for other dairy products also rose significantly within the past year. Cream, milk and quark are all products which have individually seen recent price increases of about 30 percent.

Prices for semi-hard and hard cheese have moreover risen by over 11 percent. Consumers also have to pay five percent more now for yoghurt then they did a year ago.

The reasons to account for this are varied, report various German media.

Thousands of farms, especially smaller ones, were forced to give up producing milk during the milk price slump in 2015 and 2016. Since then, milk is being produced in smaller quantities, reports the Sächsische Zeitung (SZ).

There is also an increasing demand amongst consumers in Germany as well as abroad for more fatty products, according to farmers associations. Butter in particular has a better image now than ever before.

“The period when only light or low-fat cheese was bought apparently has come to an end,” Henryk Schultz, chairman of a regional farmers association in Saxony told SZ.

The same goes for cream, Schultz added, despite the fact that nutrition experts continue to criticize the health factors associated with consuming animal fats.

In spite of the current price increase, the Federal Association of Dairy Cattle Farmers in Germany are concerned that prices for butter and other dairy products could fall significantly in November.

“There is real uncertainty about this topic at the moment,” said Schultz. Due to its immense production volume, butter is no longer a luxury item the way it was in the 1960s, he said.

According to Schultz, it takes five litres of milk to make one 250 gram block of butter and the product’s current price will help regional economies across the country.

“Agricultural work will only be attractive if we can pay appropriate wages.”

Schultz hopes consumers will understand if paying “€2 or – even better – €2.50 for a good piece of butter becomes normal.”