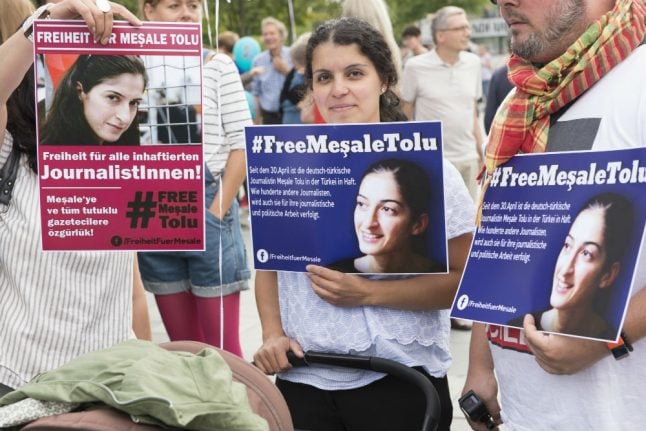 Her case is one of several others which have led to a crisis in relations between Ankara and Berlin.

Mesale Tolu, 33, initially detained in late April, is charged with membership of the Marxist-Leninist Communist Party (MLKP) which is outlawed in Turkey as a terror group.

She is one of several German nationals detained under the state of emergency imposed in Turkey after the failed coup attempt last year, in a crackdown Berlin has criticized as excessive.

Tolu went on trial Wednesday at a court in Silivri outside Istanbul along with 17 others charged in the same case. If convicted, she faces up to 15 years in jail.

The court ruled that Tolu and five others would remain in prison, while eight would be released pending trial, the Law Office of the Oppressed which is representing her announced.

Tolu, who worked as a reporter and translator for the leftwing ETHA news agency, is being held in the Bakirkoy women's prison in Istanbul. Her three-year-old son is with her there.

During the hearing, she denied the charges against her, according to the Law Office of the Oppressed.

“I do not accept the accusations made against me in the indictment. I was targeted by the police because of the translation I had done for ETHA,” it quoted her as saying on its Twitter account.

She is accused of attending funerals for MLKP militants and demonstrations of the banned group, but supporters see the case as politically motivated.

“All the accusations are lies and empty,” her father Ali Riza said outside the court, quoted by ETHA on its Facebook page.

Also in jail, but yet to go on trial, is Deniz Yucel, the German-Turkish correspondent of Germany's Die Welt newspaper who was arrested in February on charges of terror propaganda.

Turkey's President Recep Tayyip Erdogan has personally described him as a “terror agent”.

In a separate case, German activist Peter Steudtner is one of 11 campaigners held by Turkey on charges of backing a terror group after a raid by the authorities on a workshop run by Amnesty International.

Critics say there has been a drastic decline in press freedom under Erdogan's rule, particularly in the wake of the failed coup.

According to the P24 press freedom group, there are 170 journalists behind bars in Turkey.

The Wall Street Journal said Tuesday that one of its reporters was jailed in absentia for two years and one month on charges of publishing “terror propaganda” in an article on clashes between the Turkish army and outlawed Kurdish militants.