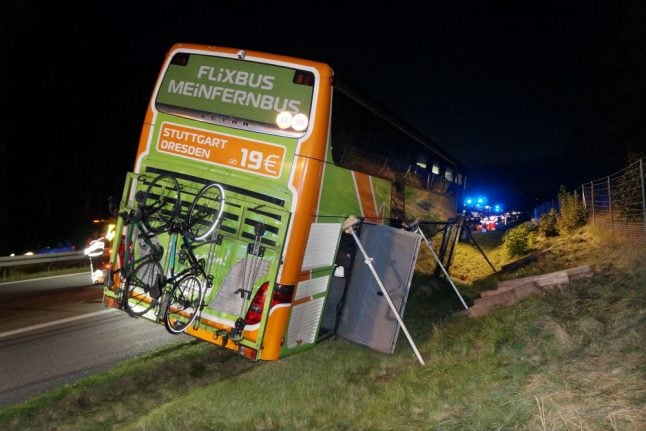 The Flixbus on the side of the Autobahn. Photo: DPA.

The stretch of Autobahn in Brandenburg near Herzsprung where the crash occurred was shut down for several hours on Sunday evening, as an emergency operation was underway to prop up the bus after the collision.

According to police, the bus, which was on the way to Hamburg from Berlin, rammed into a car while overtaking it. The bus then collided with another car and pushed it 500 metres down the road. At this point, the bus came to a halt, but the driver then drove a further 150 metres down the road.

The coach driver was lightly injured, as was the driver of the car. But the woman in the passenger seat sustained much more serious injuries.

At the end of the incident, the coach careened to the right and tipped over the edge of the Autobahn. Upon their arrival, emergency crews had to prop up the vehicle to ensure that it did not fall over.

Police took a blood sample from the driver and took away his driving licence. They suspect that he was under the influence of medication and “unfit to drive.”

Passengers were cared for at the scene, with some reportedly suffering from shock. A replacement bus was sent out to take them on the rest of their journey to Hamburg.

Meanwhile, in another serious bus accident in Germany on Sunday, one woman has died and 21 passengers have been injured.

The accident took place in Tecklenburg, North Rhine-Westphalia when a shuttle bus transporting 77 church event participants veered to the right side of the road and tipped into an adjacent corn field.

According to a police report, the cause of the accident is still being investigated.