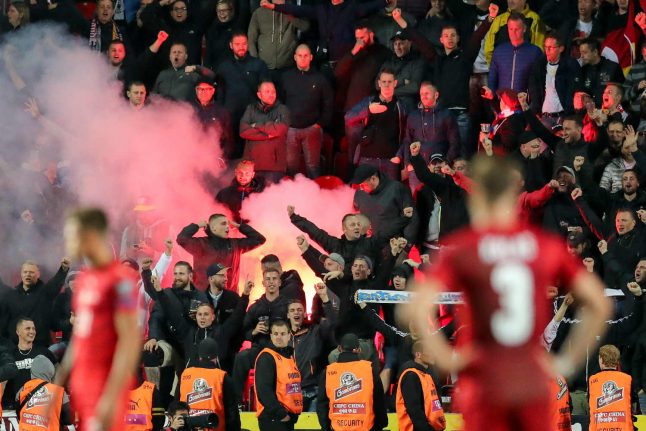 German fans during the World Cup 2018 qualifier against the Czech Republic in Prague. Photo: DPA

Germany have three qualifiers left but can wrap up their place at next year's tournament in Russia by beating Norway in Stuttgart on Monday if nearest rivals Northern Ireland fail to beat the Czech Republic the same night in Belfast.

However, the behaviour of a group of travelling fans in Friday's 2-1 win against the Czechs in Prague has shocked Joachim Löw's team.

The chants were particularly embarrassing from a German perspective as they came on the anniversary of the invasion of Poland by Nazi Germany, which started World War II in 1939.

But the result was tainted by the repulsive chants, while German fans whistled during the minute's silence before kick-off for two deceased Czech officials.

Chants of “Sieg Heil” (Hail Victory) from a block of German fans during the game were heard by the horrified players on the pitch.

Germany striker Timo Werner was also verbally abused by a 200-strong group of travelling supporters despite scoring the opening goal after four minutes.

The 21-year-old RB Leipzig forward is unpopular after diving to win a penalty during a controversial Bundesliga match last season at Schalke.

The Germany players refused to go to the away block after the final whistle, as is customary.

“The chants were a catastrophe — really bad,” fumed Hummels. “That started during the minute's silence, which showed the bad behaviour of some fans.

“Timo Werner was insulted and ridiculed, that is when the fans started shouting that shit.

“We distance ourselves completely from it and want nothing to do with it.

“That's why we didn't go (to the away fans). These people aren't fans, they are trouble-makers, hooligans who have nothing to do with football fans.

“We have to get them out of stadiums.”

Werner thinks the chants could have come from Dynamo Dresden supporters, arch rivals of his RB Leipzig club.

Dresden, the heartland of Germany's right-wing scene, is just 150 kilometres from Prague.

“You know what is nearby, so you can imagine where that comes from,” he said.

The DFB president Reinhard Grindel was proud of the “fine sense” the team showed in making a stance and said that a group of German fans had managed to buy tickets without the DFB's consent.

The German Football Association (DFB) hope there will be no repeat of such poor behaviour from their own fans against Norway.

“Together – as a team, the fans and DFB – we have to face these trouble-makers.”

Werner is looking forward to playing in his home city Stuttgart, where he started his career, even if he may face more jeers and insults during the match against Norway.

“I'm looking forward to Stuttgart, even if I should face a few whistles there, I don't care. I'll just play my game,” he said.