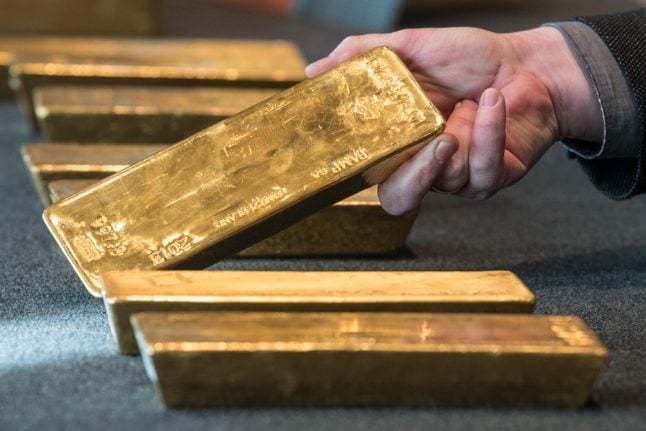 Gold bars at the Bundesbank in Frankfurt. Photo: DPA

Some 374 tonnes of the metal, 11 percent of the German stock, left the vaults at the Banque de France, or Bank of France, while 300 tonnes have been removed from the Federal Reserve in New York to the Bundesbank vaults in Frankfurt, board member Carl-Ludwig Thiele told journalists.

The secret shipments were finished far ahead of the 2020 deadline at a cost of some €7.7 million, bringing the share of German gold stored at home to 50 percent.

Shipments have been underway since a 2013 board decision to return the precious ingots home.

Germany began securing its reserves abroad during the Cold War, when the Bundesbank preferred to keep most of its gold safe from the prospect of a sudden Soviet invasion.

New York was a favoured location as home of the world's most vital currency, the US dollar, while London's deep gold market could allow the metal to be quickly converted into cash in an emergency.

Meanwhile, the share of the cache in France was built up during the decades of Germany's post-World War II “economic miracle”, as the Bundesbank converted the country's trade surpluses with its neighbour into gold stored in the Parisian vaults of the Banque de France.

But at the height of the eurozone crisis in 2012, eurosceptic voices began pressing for an audit of the precious metal kept abroad, in case it might have been tampered with, lent out or sold off.

The Bundesbank responded to the calls for greater transparency by bringing a larger share home.

After extensive tests upon arrival, “there were no issues with the authenticity, fineness or weight of the bars,” Thiele said.

Germany holds the world's second-largest gold reserves after the United States, at 3,378 tonnes or 270,000 ingots of around 12 kilogrammes each — for a market value of around 120 billion euros.