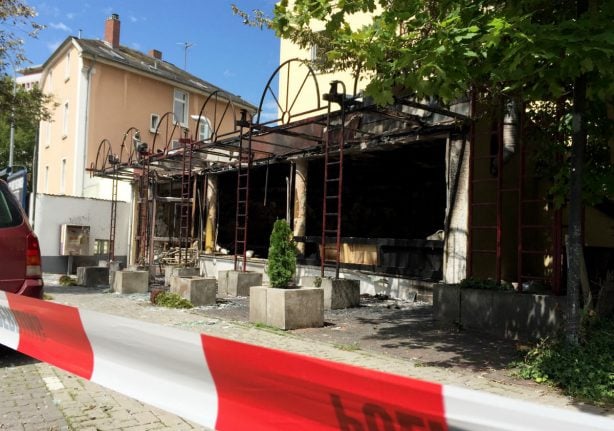 The shisha bar where a fire and an explosion occurred in Gießen. Photo: DPA.

Police arrested two suspects in Gießen for attempted murder and arson after a fire and a severe explosion at a shisha bar early Thursday morning.

The suspects, a 22-year-old man and a 23-year-old man, are believed to have entered the shisha bar building early on Thursday morning and set a fire. At 3:20 am, an explosion occurred, seriously injuring the 22-year-old suspect. Five other people sustained minor injuries from the fire and the explosion.

After the explosion, the 22-year-old was treated in a hospital, but police were unable to question him due to his injuries.

The 23-year-old suspect came to the attention of investigators through a witness statement and by the car he used to flee the scene. He later turned himself in to police.

Police estimate that the property damage at the scene of the explosion totaled several hundred thousand euros.

According to a police report, investigators are still looking for the two cars that were allegedly used by the suspects.

One car is a 1996 Opel Tigra, which police believe most likely served as an escape vehicle. The second car is a 1997 grey Open Vectra.

Witnesses who saw either of these two cars during the time of the explosion are asked to contact police in Gießen at 0641 7006 2555.