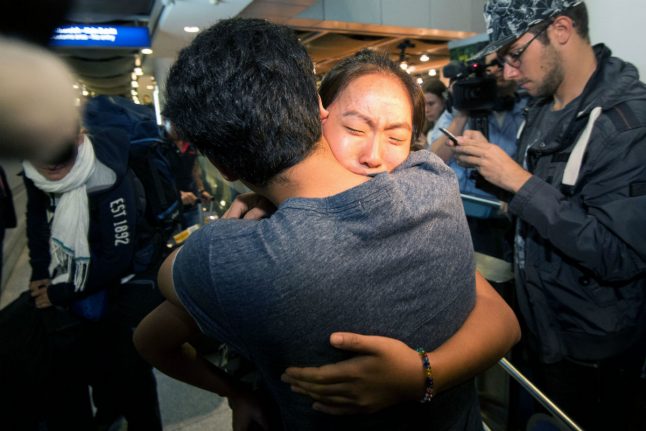 Tears were flowing as 15-year-old Bivsi Rana was welcomed at Düsseldorf airport by about a dozen friends and classmates holding “welcome back” banners for her on Wednesday.

The German-born girl was deported in May to Nepal, a country where her parents are from but where she had never lived.

“I couldn’t even say goodbye to my friends and the people in my class and I felt like I was a serious criminal,” said Rana on the circumstances of her deportation, Die Welt reports.

Rana's parents fled the Nepalese civil war to Germany roughly 20 years ago before she was born and applied for asylum. But they initially used false names for fear of future political persecution. Because of this, their application to stay in Germany was denied and they were ordered to be deported.

Otherwise her father had worked full-time in Germany, paid taxes and contributed toward the pension system.

“It was my only mistake,” her father told broadcaster WDR.

As a result, Rana was taken out of class in her school in Duisburg on May 29th and sent on a plane with her parents 7,000 kilometres away to Kathmandu.

After weeks of protests – as pictured below – and petitions from fellow pupils, teachers and politicians, Rana and her parents were permitted to return to Germany.

“We are a bit proud that we’ve managed it,” said Rana’s friend Sara, who is from Afghanistan.

Rana was granted a student exchange visa and her parents have been permitted to accompany her back to Germany on humanitarian grounds. That means that rather than applying as an asylum seeker, after her summer break, Rana will join her class as an exchange student.

After Rana finishes high school, she can then submit another visa application if she wants to study or pursue other vocational training.

Rana's 22-year-old brother Biswash has also joined the family in Germany after being raised in Nepal by grandparents and other relatives. He will be studying in the country and already speaks German.

Biswash also brought along to the airport the key to the family's flat, which the landlord had kept free for them after their deportation.

For the time being, it looks like Rana and her family won't be leaving Germany again anytime soon.