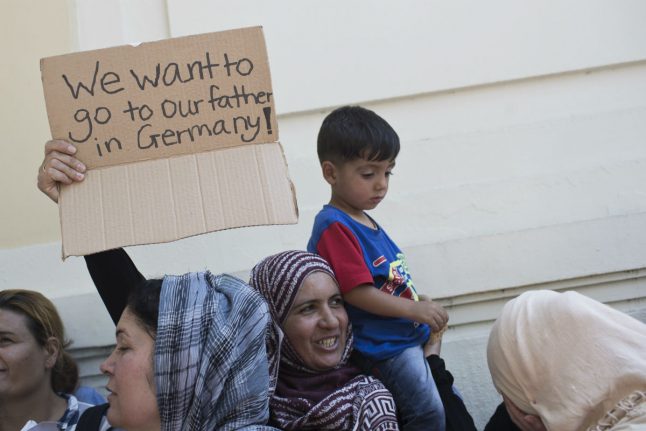 Some 150 people including Iraqis, Afghans and ethnic Kurds, from various camps in mainland Greece, held up signs in English reading “The right to reunite is not a crime” and “No more waiting.”

“Germany wants to block or delay reunion and leave our families divided,” Shaker Khalil, one of the protest organizers, told AFP.

“At the moment, just 70 cases are accepted on a monthly basis when three times that number is needed,” he said.

Greek police refused to allow four representatives to deliver to embassy staff a list of demands, which they said concerned urgent cases of ailing refugees or minors.

An official letter leaked by a Greek daily in May pointed to a tacit understanding between Greek and German migration officials to limit the number of reunification approvals.

Mouzalas has said the slowdown was due to “technical difficulties.”

Asylum seekers — mostly Syrian refugees in Greece's case — are entitled to join family members elsewhere in the European Union within six months from the date their request is approved.

In his letter, Mouzalas said Berlin and Athens had to agree on a “common line” so that Athens is not blamed for the delays.

Greece is housing some 60,000 mainly Syrian and Afghan refugees and migrants in camps around the country.

Many have become desperate to be allowed to continue their journey after several EU states shut down their borders last year, while others fear they will be deported to Turkey.