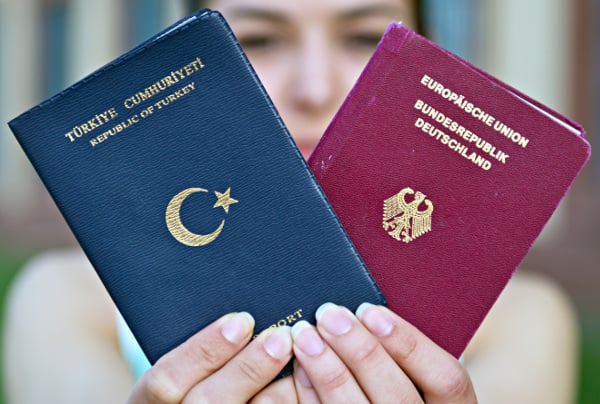 A woman with both Turkish and German passports. Photo: DPA

The Federal Statistical Office (Destatis) released a report on Tuesday showing that the number of people in Germany coming from an immigrant background increased by 8.5 percent between 2015 and 2016, reaching about 18.6 million people.

The increase of nearly 9 percent was a record high itself since 2005 when such figures were first recorded, as was the size of the population. And that means more than one in five (22.5 percent) people in Germany are either immigrants themselves, or have at least one immigrant parent.

Destatis attributed the rise to the large amount of immigration into the country in recent years. Between 2014 and 2015 – the most recent years for which figures are available – the country saw a new high of 2.14 million people move to Germany, including many asylum seekers. About 45 percent came from other EU countries.

Based on a microcensus of the population, the Destatis report for 2016 showed that 2.3 million people in Germany have Middle Eastern heritage – an increase of 51 percent since 2011. The number of people with African roots also increased dramatically by 46 percent since 2011, reaching 740,000 people.

Slightly more than half (52 percent) of those with immigrant backgrounds have German citizenship. The largest portion of those with German passports obtained citizenship at birth (42 percent). Another 33 percent were themselves ethnic Germans who resettled in the country, while one-fourth became naturalized citizens.

Those from immigrant backgrounds also were significantly less likely to have no vocational degree: 32 percent compared to 9 percent of the non-immigrant population.

The achievement gap narrows when it comes to the rate of obtaining an academic degree, with roughly 37 percent from both immigrant and non-immigrant groups completing a university entrance qualification (Abitur) and about 27 percent obtaining academic degrees.

Among those with immigrant backgrounds, people who were not born in Germany disproportionately had no vocational qualification (33 percent). But at the same time, an above average percentage of those not born in the country completed the Abitur (39 percent) and also more often had academic degrees (29 percent).