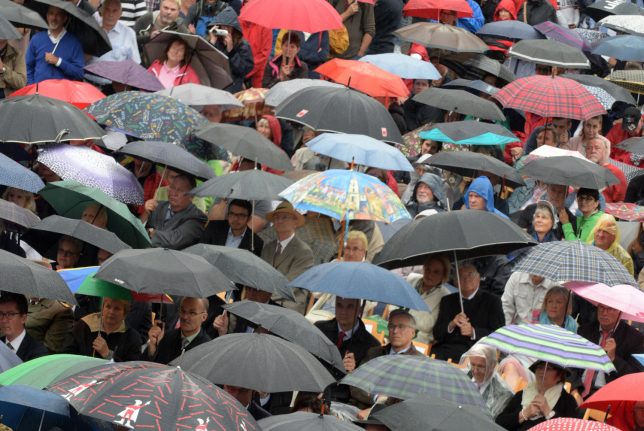 A crowd in Ulm, Baden-Württemberg on Monday waiting to hear the mayor speak. Photo: DPA.

Southern Lower Saxony and northern Thuringia were battered by storms between Monday and Tuesday, with between 50 to 80 litres of rain per square-metre falling over the last 24 hours – in some areas up to 100 litres.

“That is more than the usual monthly rainfall, and there will be some more to come,” said German Weather Service (DWD) meteorologist Thore Hansen.

In southern Lower Saxony, the rains caused flooding in basements and streets overnight before Tuesday, as well as streams overflowing. The areas around Hanover and in the Harz region were hit particularly hard, while in the town of Einbeck, the water on one street reached 20cm high, making the road impossible to drive along.

Saxony-Anhalt also experienced flooding, with the water levels of some rivers increasing dramatically.

And the storms are set to sweep the rest of the country starting on Tuesday.

“A low over central Europe is causing the bad weather in Germany, with moist and temperate air,” the DWD wrote in their weather report on Tuesday.

Several districts in central Germany between Göttingen and Braunschweig are on the highest alert (level four, dark purple in map below) for extreme weather conditions on Tuesday. Parts of central and eastern Germany are also on level three alert (red area on the map below) for bad weather, including Berlin and its surrounding area.

The northeast and south are set to experience squalls over the next 24 hours.

The rainy weather is set to continue across Germany through Wednesday and in most places also into Thursday. The southwest around Stuttgart and Konstanz is the only area expected to see clear skies on Thursday.

Even Friday is set to be a rainy day – also in Stuttgart and Konstanz – from north to south.