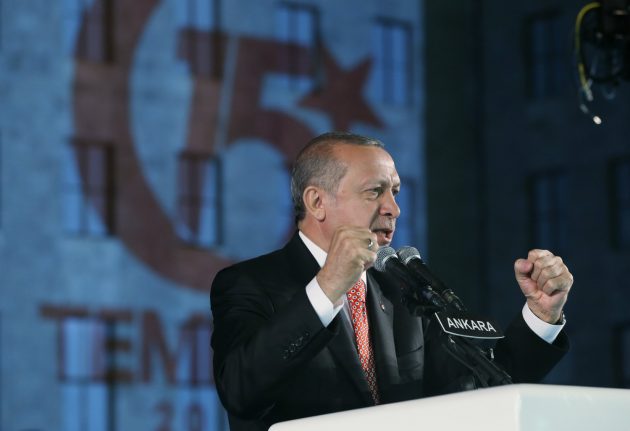 As relations between Berlin and Ankara plumbed new depths, a spokesman for the German interior ministry said his Turkish counterpart had contacted him about the allegations levelled against nearly 700 German firms including giants Daimler and BASF.

The spokesman, Tobias Plate, said Berlin had been told that the list of companies with Turkish operations being investigated for “financing of terrorism” lodged with Interpol in May had been withdrawn, saying the suspicion had been based on a “communication problem”.

The Turkish interior minister “assured us that the Turkish authorities were not investigating companies on the list in Turkey or in Germany,” he said.

German newspaper Die Zeit reported last week that Turkey had handed Germany a list of 68 companies and individuals suspected of links to terror due to alleged contacts with the group of the US-based preacher Fethullah Gulen, who is blamed for Turkey's failed coup last year. Gulen denies the charge.

Die Zeit said the companies probed ranged from industrial behemoths to a stall selling doner kebab in the west of Germany.

Turkish President Recep Tayyip Erdogan on Friday denied the claims, saying the reports were “black propaganda” aimed at pressurising German companies not to invest in Turkey.

“You have no power to darken Turkey,” Erdogan said.

Turkish Prime Minister Binali Yildirim had also dismissed the report as “entirely a lie” and urged Berlin to solve an escalating crisis through dialogue.

A spokeswoman for the German economy ministry, Tanja Alemany, said Monday that despite the “clarification” of the issue, it would “take a while before German companies can win back confidence” in Turkey as a place to do business.

Ankara's overture to Berlin came amid severe tensions between the NATO allies over arrests of German citizens.

German Foreign Minister Sigmar Gabriel had said on Thursday that Berlin would review state guarantees for foreign investment in Turkey and urge businesses against putting their money in the country.

The German foreign ministry also warned it could no longer guarantee its citizens' safety in Turkey, in a move sure to impact Turkey's crucial tourism industry.

The latest crisis was precipitated by the order of a Turkish court to remand in custody six human rights activists detained on an island off Istanbul including Amnesty International's Turkey director Idil Eser and Berlin-based activist Peter Steudtner.

But Berlin was already furious over the jailing in February of Deniz Yucel, Turkey correspondent for Die Welt newspaper, who Erdogan has personally denounced as a “terror agent”.