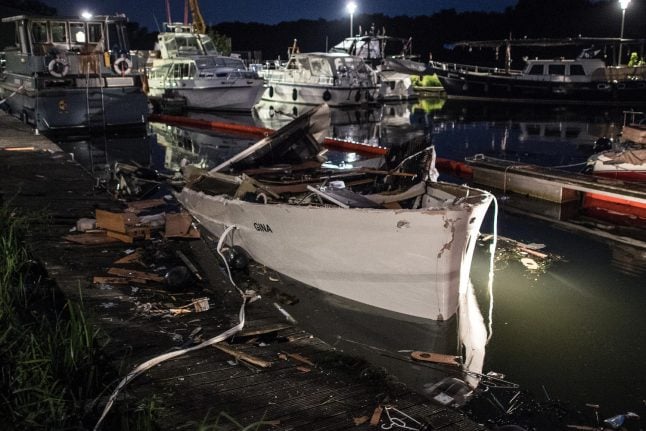 The aftermath of the explosion in Minden. Photo: DPA.

Firefighters were alerted to clouds of smoke coming from a yacht at the harbour in Minden on Tuesday evening. The first to arrive was a volunteer fire brigade, with the regular fire department arriving not long after.

“We went onto the ship with a thermal imaging camera. We were still in the investigation phase, when there was a bang,” said fire department chief Heino Nordmeyer.

“Then there was this moment of shock when no one could grasp what was happening.”

Two firefighters were on the ship when it exploded, and were then covered in debris. One of them ended up with his head in the water. The third person to be seriously injured was standing on the jetty and sustained facial injuries in the blast.

“It was a pressure explosion,” said Nordmeyer.

The three did not suffer from burns, but rather bruises. All underwent surgery and are now in stable condition.

The yacht was left largely destroyed, and all that is left is the hull.

The exact trigger of the blast is not yet clear.

“We are investigating at the moment with urgency as to the cause,” said a spokesperson from the water protection police.

But finding the culprit behind the explosion could prove complicated: first a fire investigator must travel to the town, and then they must determine whether to perform the analysis with the boat in or out of the water.

Police say so far there is no evidence of arson.