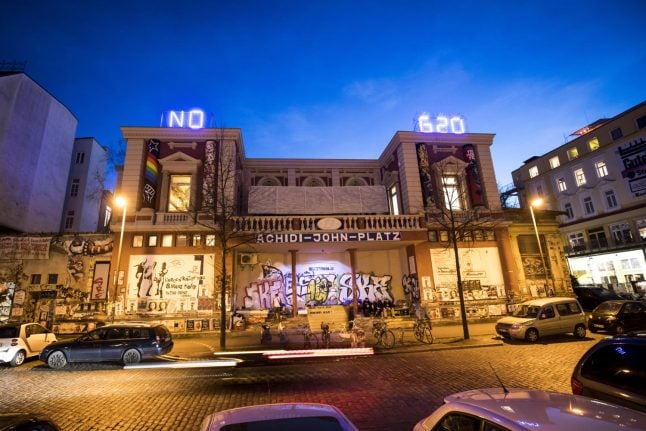 The Rote Flora lit up with signs saying "No G20". Photo: DPA.

Images of burning cars, masked rioters attacking police, and reports of around 500 injured police officers dominated much of the news about the G20 summit in Hamburg last weekend, leading conservative politicians to set their sights on cracking down on left-wing radicals, including one particularly iconic site: the Rote Flora.

Activists from this former theatre were organizers of the Welcome to Hell demonstration on Thursday, during which conflicts between police and anarchists or “black bloc” rioters began to escalate.

“When this becomes a habit, it is not so easy to solve it,” he said.

Members of the conservative Bavarian CSU party wrote in a paper released on Tuesday that “virtually extralegal spaces like the Rote Flora [in Hamburg] must systematically be shut down”.

“These places are breeding grounds for danger to the life and limb of the entire population. This must be stopped by all means.”

There was also an online petition started on Change.org, started by a local businessman which collected nearly 6,000 signatures, to close the Rote Flora as it is, and turn it into a kindergarten. But this petition has since been taken down, according to the Hamburger Abendblatt because the author was being harassed on Twitter.

The Rote Flora (Red Flora) was first built as the Flora Concert House in the 19th century, reaching its heyday in the 1910s and 1920s. The theatre featured boxing matches, operettas, variety shows and film presentations.

SEE ALSO: How Hamburg's anti-G20 riots were born in West German squats in the 1980s

After the Second World War, it was used as a cinema, before later becoming a department store until 1987. Then the city of Hamburg wanted to turn it into a musical hall for the Phantom of the Opera, but this did not sit well with the residents of the neighbourhood, which had already developed an alternative scene.

On November 1st 1989 – a week before the Berlin Wall fell – left-wingers declared the building occupied, and it was dubbed the Red Flora. The plans for the musical hall were dropped, and the new inhabitants declared it to be “free space for realizing an autonomous life”.

Punk and experimental music, as well as political events have since been part of the regular programme. The spot is also known for being at the heart of riots during other events, such as May 1st Labour Day demonstrations.

The venue lists its address as Achidi-John-Platz 1 – named after a suspected drug dealer who died in 2001 after being forced by police and a doctor to ingest through his nose a substance used to induce vomiting. His death sparked protests within the left-wing scene at the time.

While legally speaking, the city could easily seize back the building, the reality of this notion would likely be extremely fraught.

As one Hamburg local calling himself simply Tim told The Local amid the G20 protests and riots, he suspected the venue would be fiercely defended against eviction efforts, with people even coming from outside Hamburg. And given that the surrounding area is becoming more attractive as real estate, the topic of gentrification could further fuel left-wing rallies to protect the squat, Tim added.

Activists from Rote Flora said on Tuesday that calls to shut down the squat are a way to distract the public from police officers’ own actions.

“It is obvious that through this debate, all of the escalation by the police and their violations of fundamental rights is supposed to be forgotten, and above all, the ruling SPD party wants to deflect from their own political failings,” said Rote Flora spokesman Andreas Blechschmidt on Tuesday.

“We have never believed that the Flora would be safe for the long term from the city selling it.”

How the Rote Flora had factored into the violent riots during the G20 world leaders summit is set to be discussed at an assembly on Tuesday evening, Blechschmidt added.

“We have a clear political bent,” he said. “Therefore, we do not distance ourselves from the protests against the G20 summit by themselves.”