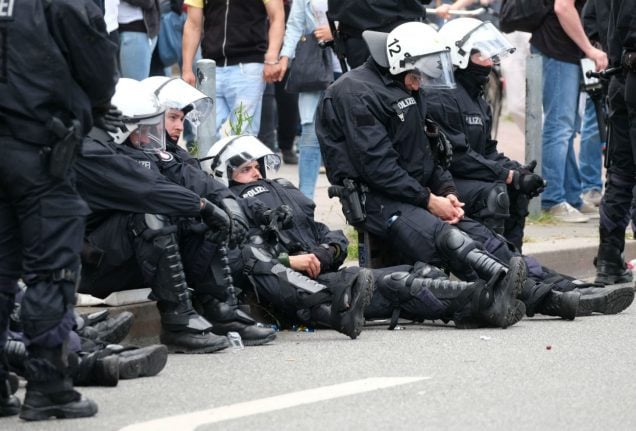 Demonstrators gathered after the close of the summit in the Schanzen district, a stronghold for radicals which was the site of multiple confrontations since Thursday.

Armed with glass bottles and targeting vehicles, many of which they set on fire, the rioters were pushed back by officers, using water cannon and tear gas, police said on Twitter.

At a news conference, the head of operations for Hamburg police, Hartmut Dudde, said 476 officers had been injured since Thursday in a deployment of more than 20,000 officers, and 186 people were detained. No accurate number for protesters injured was available.

Earlier President Frank-Walter Steinmeier surveyed the damage and visited wounded officers in hospital with Hamburg Mayor Olaf Scholz, saying he was “shocked and dismayed” by the “will to destroy shown by demonstrators against police and private citizens' property”.

“We must ask ourselves as democrats whether a few violent protesters can keep countries such as Germany from holding such international meetings,” Steinmeier told reporters.

Scholz thanked the “heroic” police for their service and the citizens of Hamburg who brought flowers to a military hospital where many officers were being treated, pledging compensation for those who suffered losses from vandalism.

He dismissed criticism by some peaceful demonstrators that officers had been excessive in what he called “the biggest police operation in the post-war period” and called for “lengthy jail sentences” for participants in the riots.

The explosion of violence at the meeting had sparked pointed questions over how Hamburg could descend into “mob rule” and why Chancellor Angela Merkel chose a hotbed of leftist militancy as the venue.

Hamburg, a vibrant port city, is a citadel of anti-capitalist radicals and authorities had long been bracing for possible violence on the sidelines of the summit.

Dudde admitted that despite 18 months of preparation that security forces had been “surprised” by the extent of the violence.

The German police officers' union GdP on Friday hit out at so-called black bloc anarchists, accusing them of “hijacking peaceful demonstrations by tens of thousands of people to deliberately attack” police.

The clashes occurred as leaders from the world's 20 biggest developed and emerging economies held a two-day meeting focusing on trade, terrorism, climate change and other key global issues.

World leaders made concessions on trade and climate language to US President Donald Trump Saturday at the end of the most fractious and riot-hit G20 summit ever, in exchange for preserving a fragile unity of the club of major industrialised and emerging economies.