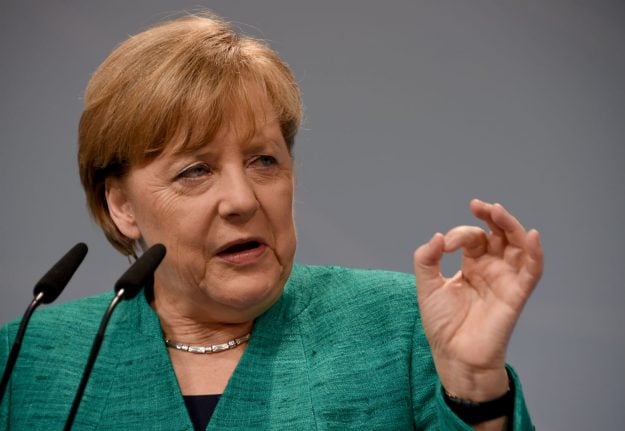 In a press conference on Saturday concluding the G20 summit in Hamburg, Merkel first and foremost denounced the series of riots that left more than 200 officers injured, cars burning, and businesses with smashed windows amid the meeting of world leaders.

“I wholeheartedly condemn the unfettered violence and uninhibited brutality against police during the days of the G20 summit,” the Chancellor said in her opening remarks.

When asked about the many peaceful protests staged over the past week, Merkel expressed that they had made a positive impact.

“I think that the many, generally civil activities including the peaceful protests on the periphery of the G20 summit venue, they of course helped to again clearly put pressure on us and set expectations, and certainly therefore contributed to us knowing that while we are here meeting, many, many people expect results,” the Chancellor told the press conference.

SEE ALSO: Who is to blame for the riots that hit Hamburg during the G20?

She did however acknowledge that some delegates had trouble reaching their hotels amid the demonstrations that blocked roads, and said that the images they saw on television of the violence were not so pleasant.

“But they were also impressed by the work of the police, which is why they told me I should thank the police,” Merkel noted.

One of the world leaders who has already expressed his support for the Chancellor and Hamburg’s handling of the protests was US President Donald Trump, singing a bit of a different tune than his past criticism of the German leader.

Trump said on Saturday that, despite violent protests that blocked his wife Melania from leaving their accommodation for hours, Merkel organised the summit “so professionally and without much interruption despite a few people (who) seemed to follow your G20s around,” adding that she has “been amazing and done a fantastic job”.

Hamburg police reported on Saturday that more than 200 police officers have been injured amid violence and vandalism over the last few days, with rioters setting residents’ cars on fire, smashing shop windows, and arming themselves with Molotov cocktails.

As of Saturday afternoon, 143 people had been arrested, while 122 others were taken into custody.

Several Hamburg residents who The Local spoke with over the course of Friday expressed resentment against government officials for allowing the summit to take place in a big city known for its radical left-wing scene, especially with the venue right next to known leftist neighbourhoods.

“The G20 shouldn't have happened in Hamburg,” Giorgio Ellero told The Local outside the broken windows of his Italian restaurant, fractured on Friday morning.

Despite broken windows,damage on street, pizzeria owner says: “We'll stay open. We won't let ourselves be under siege” #G20Hamburg pic.twitter.com/oaMVqgYmaN

“The mayor is responsible. He should have thought about whether it was right to have the G20 in Hamburg… Now the little people like us are the ones impacted.”

“Whoever decided to have the G20 here does not remember Hamburg's left wing history,” said Hamburg resident and casual observer Carsten amid a police stand-off with protesters. “The politicians are kept away, seeing a nice concert at the Elbphilharmonie and only viewing the city from their hotel rooms. So what's the point of having it here?”

But Merkel defended the decision to hold the summit in Hamburg, citing previous host cities like London, which held the G20 in 2009.

“I say very openly that as such a major political economy committed to multilateralism… that we could not shirk our responsibilities,” she said.

“I do not think that you can say ‘in certain places we absolutely cannot do certain things’. We had to do it in a big city due to hotel capacity, and the police have given and are still giving it their absolute best.”

The Chancellor did however acknowledge how it was “unfortunate” that citizens and shop owners bore a part of the damage caused by more violent elements emerging amid protests. She therefore promised to swiftly look into providing help to such victims through compensation, and free of red tape.

“We are looking into how – not if – we will help,” she confirmed.