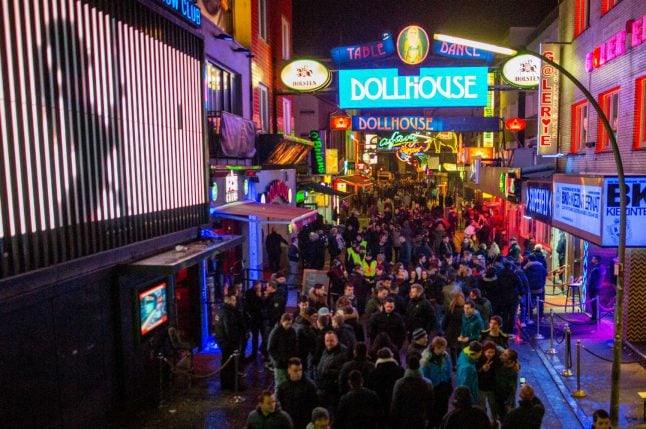 A view of the Reeperbahn. Photo: DPA

You only need to walk a few hundred metres from the tightly-controlled security zone, which has been created for world leaders at the G20 summit, and you arrive at a part of Hamburg which attracts visitors from far and wide for a very different reason.

The Reeperbahn – perhaps the most famous street in Germany – is a kilometre of gaudy lights, cheap beer and quick sex. Sweaty clubs, strip bars and brothels jostle for position along the wide thoroughfare and its pokey side streets.

Ahead of the world leaders' G20 meeting starting on Friday, the pavements of the Reeperbahn are full of party-goers pushing past begging punks, drunks and prostitutes waiting for their next john. In other words, it's life as usual.

“I’m not expecting any great rush to come here,” says Christian Fong, manager of the Dollhouse strip club, looking forward to Friday and Saturday when the G20 convenes.

“We just hope that we’ll even get business,” he adds.

In the build-up to the summit, police have blocked streets in the city centre, meaning roads have been shut off to transport. Meanwhile, radical protesters have threatened to shut down key roads in an attempt to “kettle in” the political leaders. Even on the Reeperbahn, a beefed-up police presence can be felt.

MUST READ: Every visitor to Hamburg has to go precisely to these eight spots

But in the legendary Zur Ritze bar, the staff are relaxed about the fact that Hamburg is about to become the centre of the world's gaze.

The pub will open as usual, a barmaid confirms.

“We’re used to much worse,” she adds, laughing.

In the Quer Club on nearby Hans-Albers-Platz, they’re not taking it so lightly.

“We’ll probably close our doors on both days,” one staff member says.

At the Non Stop Shop, a kiosk that sells drinks late into the night, they also aren’t taking any chances, and have stocked up their security personnel. The Klubhaus St. Pauli will turn off the lights of its normally Christmas tree-bright facade. Other bars and clubs are boarding up their windows.

The brothels also aren’t pinning their hopes on floods of delegates arriving to unwind at the end of a stressful day.

“If anything, it’ll probably be quieter,” says Thomas Eitner, manager of the Pink Palace.

“I think the delegates will probably go to the posh nightclubs, where they can quaff down champagne.”

And residents of the traditionally left-wing neighbourhood aren’t best pleased either.

“There is a lot of anger,” said Matze, a 53-year-old local. “The police have been patrolling here for weeks. Residents feel like their freedom of movement has been massively curtailed.”

Meanwhile some are going a step further.

The well-known drag queen Olivia Jones has announced a ban on Donald Trump, Recep Tayyip Erdoğan and Vladimir Putin in her establishment. She has even had a sign designed, which she is encouraging other bars to hang out. On it she has had the logo “no tolerance for intolerance” printed.

So now Trump has reportedly be rejected by a five-star Hamburg hotel, Erdogan has been banned from public speaking – and to top it all off neither of them are welcome in the famous red-light district.