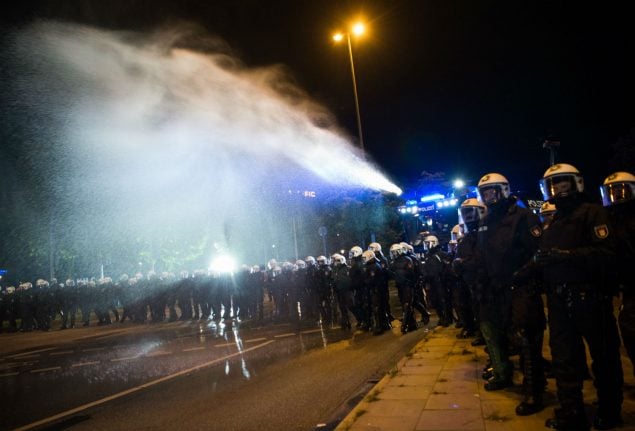 Riot police use a water cannon in Hamburg. Photo: DPA

Police first dislodged protesters who had set up tents in a park in the western district of Altona, according to police and media reports.

“This is not a legal rally but unauthorised camping,” said a police spokesman.

A little later, shortly before midnight, police used water cannon and pepper spray to disperse rallies of several hundred people who had started blocking roads in various locations, in particular the Sankt-Pauli neighbourhood.

One person was arrested and a passerby, who was not involved in the demonstration, was slightly injured, according to a police message on Twitter.

On Sunday police used pepper spray as they cleared tents set up by some 600 activists on the banks of the Elbe river.

Anti-G20 protest organisers and the city-state of Hamburg have for weeks sparred in the courts over whether activists could set up tent cities.

Courts have found that, while such a protest camp would in principle be a legitimate political demonstration, police had the right to prohibit overnight camping on public lands.

More than 100,000 anti-capitalist demonstrators, including several thousand leftwing extremists, are expected to descend on the northern city ahead of the summit which opens on Friday.

About 20,000 police will be deployed to protect leaders attending the two-day meeting.