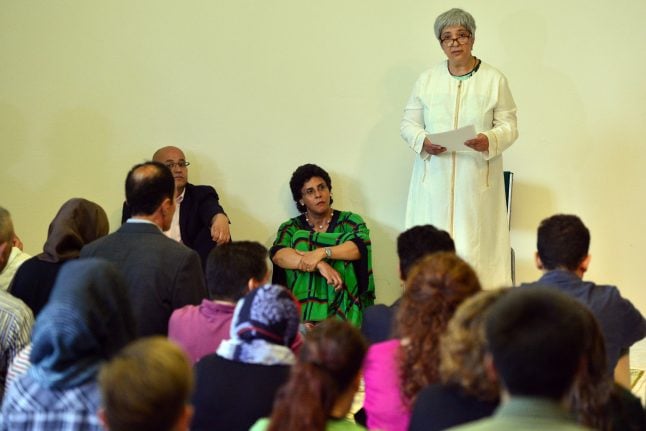 Seyran Ates preaching at her mosque in Berlin. Photo: DPA.

Seyran Ates, whose Ibn Rushd-Goethe mosque opened less than three weeks ago, told Welt am Sonntag at the weekend that she had already received 100 death threats.

The mosque allows men and women to pray as well as preach together, and also promotes itself as being open to LGBT Muslims. But the mosque does not allow full-face veils to be worn.

“Over social media, I have received so many death threats due to the founding of the mosque that the State Office of Criminal Investigations has determined that they must protect me around the clock,” Ates said.

She told DPA that on one occasion as she was crossing the street, three men spoke to her and asked if she was the founder of the “perverse” mosque where “men, women, lesbians and gays” pray together.

The 54-year-old said she was scared, but decided to speak with the men, as well as to try to attract the attention of passersby. But then she decided to hurry away as one of the men shouted “you’ll die”.

Ates has already experienced violence in her lifetime. In 1984 while working as a lawyer to help young women who wanted to leave their immigrant families, Ates was shot and sustained life-threatening injuries.

On Tuesday as she went to meet with Green party leader Cem Özdemir – who like Ates is also of Turkish heritage – she was driven in an armoured limousine and escorted by three guards.

But the threats are not just home-grown, according to reports. Özdemir told DPA that he saw the “long arm” of Turkish President Recep Tayyip Erdogan behind the harassment, and Welt also reported that Erdogan himself had called on the German government to shut down the mosque.

Ates also confirmed to Welt that there had been interference.

“That shows again what sort of man Erdogan is, that he has never understood democracy, or more precisely that he does not want to,” she said. “Erdogan thinks nothing of personal freedoms.”

The German Foreign Ministry told Welt that “we are not aware of the Turkish government taking this matter to the German government.”

Ates claimed on Tuesday that newspapers close to the Turkish government as well as the Turkey-backed Islamic organization Ditib are working against her. They accuse her mosque of being part of the movement of exiled Turkish preacher Fethullah Gülen – whom Erdogan blames for the attempted coup last summer.

“This is how this line of thought emerges: Gülen followers, terrorists, outlaws,” she said.

Ates also denied having contact with Gülen supporters, though she does speak often with the head of a Gülen movement offshoot group. At the same time, she notes that she meets with many others as well.

But she also feels somewhat abandoned by Turkish groups in Germany, who she says have not yet spoken out against the threats she received.

When contacted by DPA, the Central Council of Muslims in Germany did denounce the threats in a written statement.

“I utterly condemn the death threats and can unfortunately empathize with Ms. A’s situation because I now and then also receive death threats,” wrote the council’s chair, Aiman Mazyek.