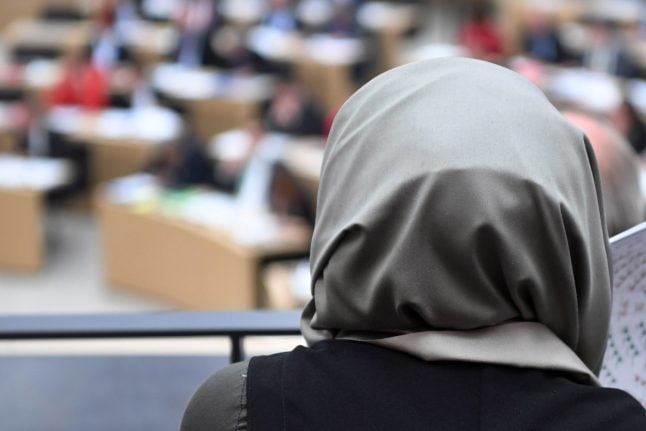 On Tuesday the Constitutional Court shot down a Muslim trainee lawyer’s case calling for a preliminary injunction against the state of Hesse's neutrality law, which bans public sector workers from wearing religious garments.

The decision was only a preliminary assessment, and the Court is set to give a final one on the woman's constitutional complaint at a later date.

In ruling against her call for an injunction, the judges gave more weight to the neutrality law than to the woman’s religious freedom.

“Legal trainees act as and are perceived to be representatives of public entities, and therefore must observe public neutrality policies,” the court wrote.

The Hesse state justice ministry forbids legal trainees from wearing headscarves during certain court procedures, and also from representing public prosecutors. But this regulation does not impact the majority of the training programme activities, and therefore the Court found that there was only a limited infringement upon the woman’s religious freedom.

The debate about religious clothing has become especially heated in light of the record number of refugees who arrived in Germany over the last two years, most from Muslim-majority countries. The far-right Alternative for Germany (AfD) saw its popularity soar amid the influx, with calls for banning headscarves and minarets on mosques.

The lead candidate for the AfD, Alice Weidel, told Tagesspiegel in May that not only should full-body veils like the burqa be banned, but that the headscarf – or hijab – should also be prohibited from “public spaces, and on the streets”.

The AfD’s success in state parliament elections last year and this year arguably pushed Angela Merkel and her conservative parties to also back restrictions on religious clothing, including the passage of a partial burqa ban by the German parliament in April.

This ban only applies to public servants – including election officials, military and judicial staff – performing their duties.

Article 4 of Germany's constitutional law or Grundgesetz states that religious freedom is a fundamental right.

“Freedom of faith and of conscience, and freedom to profess a religious or philosophical creed, shall be inviolable,” it states.

“The undisturbed practice of religion shall be guaranteed.”

But how this principle applies in the workplace has been fiercely debated in Germany, particularly for public sector employees who fall under state neutrality policies.

The Constitutional Court ruled in 2015 that general headscarf bans for teachers in state-funded schools were unconstitutional. The court said that headscarves should only be banned if they were found to “constitute a sufficiently specific danger of impairing the peace at school.”

The Constitutional Court reiterated this in a 2016 decision regarding a Muslim child care worker, stating that “an ‘Islamic headscarf' is not uncommon in Germany,” and that there was “no constitutional right to be spared from the awareness of other religious or ideological creeds”.

After the 2015 ruling, some states had to revise their regulations, also because they gave preferential treatment to Christian symbols. And some Muslim teachers have won compensation in the thousands of euros from state entities for discrimination due to their headscarves, including a Berlin teacher last week.

But earlier this year, the European Court of Justice ruled that employers may ban headscarves if the company has a general ban on “political, philosophical or religious” symbols, and if there is good reason for a ban.

The Central Council of Muslims in Germany said they felt the EU ruling was in direct contradiction with the 2015 ruling regarding teachers.

The Central Council of Jews in Germany has also spoken out against bans on religious garments, which mean no kippahs worn by Orthodox Jewish men.

“I find the headscarf ban in the public sector to be problematic,” Central Council of Jews President Josef Schuster told Die Welt in April. “I do not believe that it is compatible with the Constitution.”

Schuster added that civil servants “should be able to wear signs of their religion as long as their decisions remain neutral and they behave neutrally.”