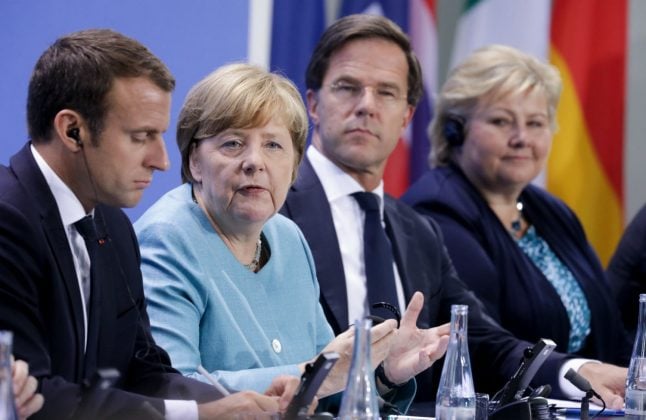 Leaders of Germany, France, Italy and other EU economies acknowledged their long standing ties with Washington but said they would not give in on “existential” threats like global warming.

The EU stood for a rules-based international system, he said, vowing that “we speak with one voice” at the G20 summit.

Merkel, who will host the July 7th-8th summit in her birth city of Hamburg, said she “knew that we could not expect discussions to be easy” after Trump announced in early June that the US would withdraw from the Paris deal.

“The differences are obvious and it would be dishonest to try to cover that up. That I won't do,” she said.

Trump's exit from the 2015 Paris pact had made Europe “more determined than ever” to make the accord a success, she stressed.

The German leader won strong support from her European allies, with France's President Emmanuel Macron saying: “On climate, we reaffirm clearly our very strong engagement for the Paris accord and our willingness to go forward.”

“And for me personally, I hope that the others can be brought back to their senses,” he added.

Germany Thursday said it had turned down Erdogan's request to make a speech to ethnic Turks on the sidelines of the G20, sparking criticism from Ankara and threatening another headache for the host country.

China's President Xi Jinping and Merkel will next Wednesday unveil a pair of pandas lent as a goodwill gesture to Berlin's zoo — but Merkel also pointed to tensions with the Asian export giant.

Even though Beijing has emerged as an ally to Europe in preaching free markets and climate protection, Merkel warned against unfettered Chinese economic expansionism.

“Europe must work hard to defend its influence and, above all, to speak with one voice to China,” Merkel told business weekly WirtschaftsWoche.

“Seen from Beijing, Europe is more like an Asian peninsula. Obviously, we see things differently.”

Underlining Merkel's scepticism of China's intentions on free trade, Macron said that “Europe, I believe, is the only hope in really defending the vision of a just free trade, multilateralism, that is both against protectionism and all forms of dumping or the non-respect of international trade rules”.

While also taking aim at Trump over his trade policy, Macron stressed that the EU was not seeking to isolate any G20 member.

“It's pointless to isolate a country,” he said. “Mr Trump expressed himself very clearly and we reacted rapidly that we do not share his vision.”

But he said the EU hopes to get the US to take a longer-term view on the climate issue.

“It's very important to voice disagreement sometimes, and to not cede when defending the right position such as in the case of the climate. But at the same time, we should not drop discussions which are … indispensable for global balance.”