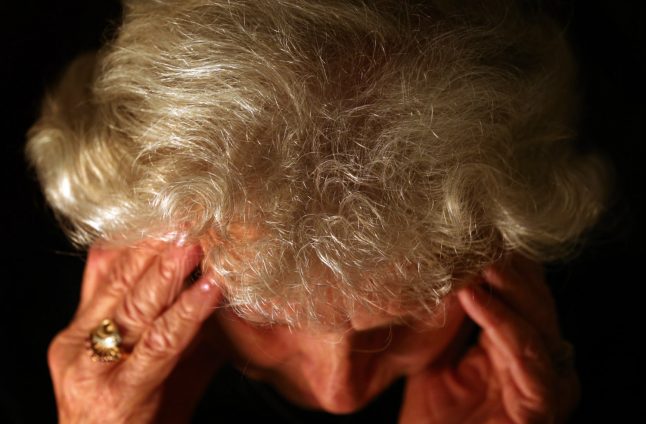 A file photo of an unrelated woman with her head in her hand. Photo: DPA

The man, named as Alfred W.,  developed dementia after having two strokes. The illness made him increasingly aggressive, the SZ reported on Thursday.

His wife, Lydia W., died on August 27th 2016 after her husband hit her to the floor and strangled her with a rope in the living room of their flat in Aubing, Munich, prosecutors allege. The couple had been married for almost 60 years.

Alfred W. has been appearing in the second criminal chamber of the district court in Munich since Thursday. Due to his dementia, he can’t criminally be held to account for the murder.

Alfred W.’s dementia had caused him to wake up during the night, get dressed and decide to go to the hairdressers or for a drive, which Lydia W. would stop him from doing. She also did not allow him to work in the garden with hedge shears out of worry that something dangerous might happen.

Because his wife told him what he was allowed to do, Alfred W. became irritated, which caused arguments between the couple.

It is likely that he wanted to drive on the day she was killed, according to Manfred W., son of Alfred and Lydia W., as he testified in court. “Aggression accumulated there” he believes.

His father told him that he “didn’t want to live like an idiot anymore”, and the 82-year-old had tried to take his own life twice.

In court, Alfred W.  refused to wear a hearing aid. He was able remember who he is, when he was born and what job he had trained to do. But when asked for his father’s name, he said “I will tell you everything, but because of the stroke I don’t know anymore.”

To the accusation that he had murdered his wife, Alfred W. replied “I haven’t done anything to anyone”, according to the Munich Tageszeitung.

Although Alfred W. requires a zimmer frame, he still has an athletic figure and used to box at an amateur level.

Manfred W.  stated that the “boxing techniques” are still in his father, which is why it was easy for him to hit his wife to the floor. Alfred W. began to weep when he saw his son in the witness stand.

The couple lived very happily together until Alfred had his strokes, according to Manfred W. “Since then it unfortunately went downhill,” he said.

The son also stated that his mother was against the idea of her husband going into the Isar-Amper Hospital near Haar, Munich, believing that he would get “better care and nursing” with her at home.

During his questioning,  Manfred W. stated that he called his mother everyday because he was worried that she was not coping.

“My mother always pretended she was managing” he said.

After he had made his statement, Manfred sat next to his father, whom he comforted by putting his left arm around his shoulder.

“What he did was bad, but I have forgiven him,”  Manfred W. told the court.

The prosecution is requesting that he be brought to an enclosed psychiatric clinic. The prosecutor’s application noted that if untreated, the 82-year-old can be expected to commit “further comparable, considerable and unlawful acts”.

He poses a danger to the public and his dementia is “not to be stopped or cured”, according to the application. The case is ongoing.