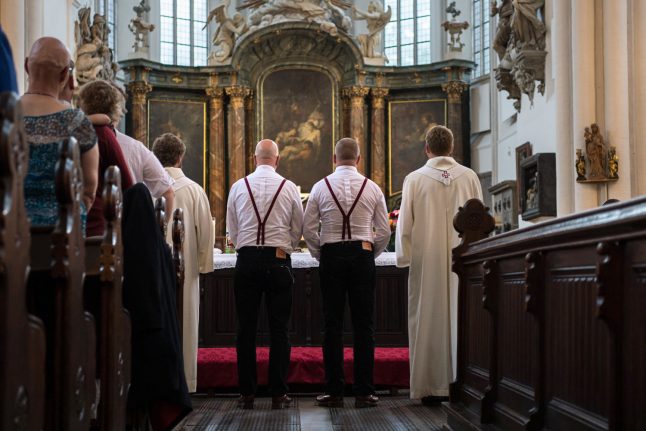 A "wedding" between two men at a Protestant church in Berlin. Same-sex marriage is still not legal in Germany. Photo: DPA.

“There will be no coalition deal with us without a clause ensuring marriage for all,” the Green Party manifesto states.

Bundestag (German parliament) MP Volker Beck was able to insert the condition into the manifest after meeting stiff resistance from the party’s executive committee, Tagesspiegel reports.

The Green party is currently polling at around seven percent, and is projected to become the fifth largest party in the Bundestag.

A result of seven percent would mark a drop of 1.4 percent on their score in the last national election in 2013. Nonetheless, they could prove to be a decisive coalition partner for either Angela Merkel’s conservative Christian Democrats (CDU) or the centre-left Social Democrats (SPD).

SPD leader Martin Schulz has talked up the possibility of a “red-red-green” coalition, involving the SPD, the Green Party and Die Linke (the Left Party).

At their party conference, the Green party refused to rule out going into a coalition with the CDU and its more conservative Bavarian sister party, the CSU.

It is still not legal for gay and lesbian couples to marry in Germany.

Same-sex couples may enter into a civil union, which entails many of the same rights as a heterosexual marriage, but many rights have been won within individual court cases rather than by top-down legislation.

This makes Germany stand out when compared to its western European allies who already passed same-sex marriage legislation years ago, like France and the United Kingdom.

Most of Germany’s border states have also legalized gay marriage, such as the Netherlands which passed same-sex marriage legislation roughly 15 years ago, making it the first country in the world to do so.

Chancellor Merkel has voiced her opposition to legalizing gay marriage, despite polls showing that a majority of supporters of the CDU support the concept.

The SPD, the junior partner in the coalition government, said in March that they intend to push through same-sex marriage legislation ahead of the national vote on September 24th.