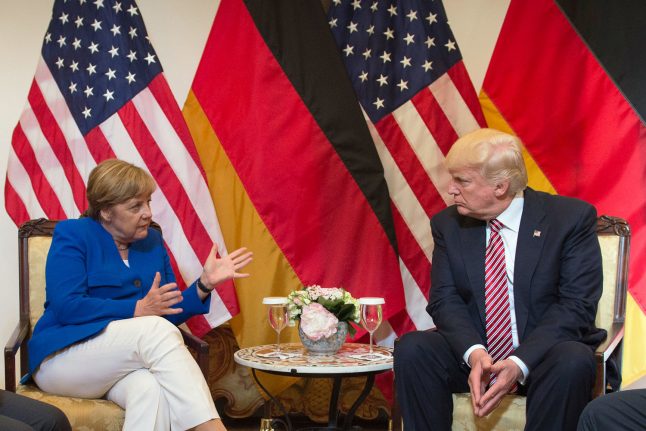 Trump's spokesman Sean Spicer insisted that the leaders “get on very well” but – as is often the case – his warm words from the White House podium were overshadowed by the president's intemperate tweets.

When Trump returned over the weekend from the first foreign trip of his presidency, his aides hailed the tour as a success and a sign of renewed and bolder US leadership on the world stage.

But, while Trump received a warm welcome in Saudi Arabia and Israel, he left behind a bitter taste in Europe after the NATO summit in Brussels and the G7 get-together of the world's richest powers in Sicily.

European leaders were especially dismayed by Trump's refusal to reaffirm US support for last year's Paris climate change accord and his failure to publicly endorse NATO's mutual defense pledge.

Germany was particularly discomfited, and Merkel wasted no time in warning German voters that the United States can no longer be relied upon as before.

Trump's response came in the early hours of Tuesday when he took to Twitter to once again demand that Germany renegotiate the terms of transatlantic trade and boost its defense spending.

“We have a MASSIVE trade deficit with Germany, plus they pay FAR LESS than they should on NATO & military,” Trump wrote, in his flamboyantly undiplomatic style. “Very bad for US. This will change.”

'Trump was not aggressive'

German officials have insisted that, as a member of the European Union, they cannot conduct bilateral trade talks with the United States and that they are not ready to dramatically increase military spending.

In January, the White House accused Germany of exploiting an undervalued euro to boost its trade advantage, despite Berlin's long opposition to the European Central Bank's loose monetary policy.
And, even after he held a frosty meeting with Merkel in Washington in March and heard her explain Germany has no independent, non-EU trade policy, Trump continues to complain about Germany's surplus.
According to the German weekly Der Spiegel, Trump told European officials in Brussels last week that “the Germans are bad, very bad.”
Spicer gamely tried to deny the report, insisting that European Commission chairman Jean-Claude Juncker had confirmed that “Trump was not aggressive on German trade surplus.”
But after Merkel and other senior German officials, who are campaigning ahead of September national elections in their own country, spent the weekend attacking Trump, the US leader returned to the theme.
'Weakening the West'
Not only does the spat continue but Merkel has seized upon it as an opportunity – in the wake of the election of Emmanuel Macron as a pro-Europe French president – to rally Europe around her leadership.
She warned German voters that her experience in dealing with Trump at NATO and the G7 had convinced her that the times when Europe could rely on Washington and London “are coming to an end.”
“Transatlantic ties are of paramount importance to us… but the current situation gives more reasons for… us to take our destiny in our own hands,” she said Tuesday.
“Europe must become a player active in international affairs.”
German Foreign Minister Sigmar Gabriel was even more blunt on Monday, slamming the US president's “short-sighted” policies that have “weakened the West” and hurt European interests.
“The short-sighted policies of the American government stand against the interests of the European Union,” he warned, judging that “the West has become smaller, at least it has become weaker.”
Speaking just days after Trump promised to sell Saudi Arabia $110 billion worth of arms in order to deter Iran, Gabriel accused Washington of fuelling religious conflict.
And he warned against “accelerating climate change by weakening environmental protection.”
Trump said he will give his verdict on the Paris accord later this week, and has warned that Washington may pull out of a pact that European leaders see as the last best hope to slow global warming.
Resume EU trade talks?
Despite the sometimes heated rhetoric, Washington is “open” to resuming talks with the EU on the Transatlantic Trade and Investment Partnership, US Commerce Secretary Wilbur Ross said late Tuesday.
Launched in 2013, negotiations on the TTIP – which would set up a huge free trade area on both sides of the Atlantic – screeched to a halt when Trump was elected on an “America First” platform.
“It makes sense to continue TTIP negotiations and to work towards a solution that increases overall trade while reducing our trade deficit,” Ross told CNBC.
“It's no mistake that, while we withdrew from TPP (the Trans-Pacific Partnership trade deal with Pacific Rim economies) we did not withdraw from TTIP,” Ross said.
When Trump took office in January one of his earliest moves was to exit the TPP, which Washington had signed with 11 countries in the Asia-Pacific region, including Japan and Australia.
Brussels and Washington failed to get the TTIP deal approved before Trump's predecessor, president Barack Obama, left office.
By Dave Clark