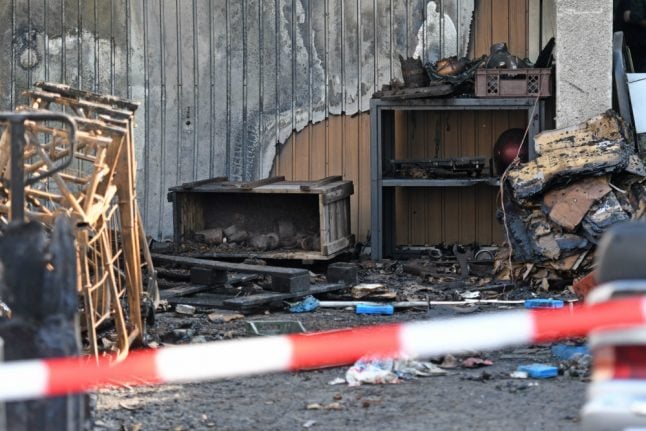 The aftermath of the explosions. Photo: DPA

Police were called to Hennef, North Rhine-Westphalia on Monday after residents heard loud explosions coming from a house.

Upon the arrival of the police, the explosions continued, leading police to cordon off the area for safety for 100 metres around the site. Around 70 people were also told to leave their homes, according to the Kölner Stadt Anzeiger.

No one was injured, but the explosions reportedly caused a fire to break out in the garage, which led to a large-scale police and fire operation to suppress the flames.

It was then discovered that a box of explosives from the Second World War was being hoarded at the home. Police initially said they suspected the munitions had exploded due to the heat, though they later explained that they were not yet completely certain as to the cause. Inside the exploded box of munitions. Photo: DPA

Upon inspection, police found more dangerous materials inside the house, including propellants.

Exactly how many old weapons were found at the home was not initially clear, according to the Kölner Stadt-Anzeiger.

A 51-year-old man living in the house with his parents was arrested, and he is now being investigated for possible violations of weapons and explosives laws.

The man told police that he had purchased the weapons at a flea market.

Neighbours say that the man had found at least a portion of the dangerous weapons by going outdoors and searching for duds with a metal detector. But police said they did not yet have evidence of this.

During the police police operation, a nearby train line and the 560 Autobahn was closed because of the potential danger, and power for the affected area was shut off, before police could work out what was causing the explosions.

Fire and explosives experts are still investigating the exact cause of the blasts, and police must still questions the man's parents, who are more than 80 years old.