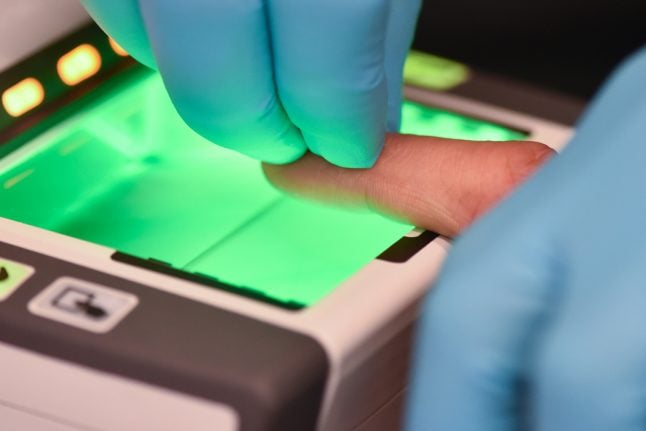 An immigration office worker scanning the fingerprints of a refugee. Photo: DPA

According to the reports by Bild and BZ, the Federal Office for Migration and Refugees (BAMF) is currently re-examining asylum decisions after a German soldier who allegedly plotted a far-right terror attack managed to obtain asylum through a fake Syrian identity.

Immigration officials have so far reviewed about 1,000 out of 2,000 chosen cases of registered Syrian and Afghan men who travelled alone to Germany without passports. Of the 1,000 cases checked so far, 10 to 15 percent of them had errors, the newspapers report.

BAMF President Jutta Cordt is set to speak to a parliamentary interior affairs committee on Wednesday about the asylum process and how the soldier, Franco Albrecht, managed to gain protected status.

The immigration authority would not confirm the figures to BZ, but said that they have launched a taskforce to address such issues, and they are bulking up on staff.

“To conclude the investigations on time, experienced decision-makers must be taken away from their current duties,” a spokeswoman for BAMF told BZ.

The case of the German soldier gaining asylum has sparked outcry and fed scepticism about the country’s ability to process the record number of asylum seekers arriving in recent years.

Albrecht’s case started to unravel in February when he tried to fetch a loaded, unregistered handgun he had hidden in a toilet at Vienna airport, but was stopped by police. Investigators ultimately found that he had created a fake identity as a Syrian fruit seller and gained asylum, despite the fact that he spoke no Arabic.

Another soldier and a civilian were also arrested over a far-right plot with Albrecht to kill politicians and then blame it on Albrecht’s fake, refugee identity, according to prosecutors.

The case has rocked the German military and raised questions about far-right tendencies among soldiers, especially after Nazi-era equipment, weapons and pictures were discovered on display in some barracks.