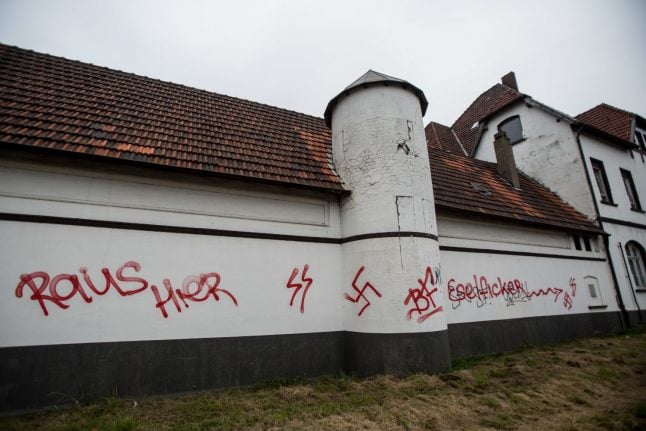 An asylum seeker home in Waltrop in 2015 with swastikas and the message "get out". Photo: DPA.

The Federal Criminal Police Office (BKA) recorded 93 attacks against refugee homes within the first three months of the year, according to a government response to a Die Linke (Left Party) enquiry seen by the Neue Osnabrücker Zeitung (NOZ). That would be about one attack per day.

This was about on par with the 106 incidents reported at the beginning of 2015, before the influx of refugees peaked in the autumn of that year.

Germany took in a record 890,000 asylum seekers in 2015. That same year, the number of attacks against refugee homes also hit record levels, with 1,031 incidents reported. That was more than five times the 199 cases in 2014. Last year also saw nearly 1,000 attacks against asylum facilities.

So far in 2017, 86 of the 93 reported cases were linked to right-wing radicals, according to the report.

Outside of asylum homes, 318 assaults were reported against asylum seekers or refugees, the vast majority of which were also linked to right-wing radicals. Another 25 attacks were against hired or voluntary refugee aid workers.

Forty-seven people in total were injured in violent attacks, including two children.

Die Linke politician Ulla Jelpke told NOZ that she saw no reason to give the “all-clear” when it comes to attacks against refugees.

“Violence and every day terror against refugees seem to have become normal in Germany,” Jelpke said.

“We should not get used to how refugees in this country are victims day-by-day of neo-Nazi or racist hostility and assaults.”

She added that her party has long demanded that the federal government create a more comprehensive campaign against this threat.

“But apparently the federal government has resigned itself to this ‘normality’.”