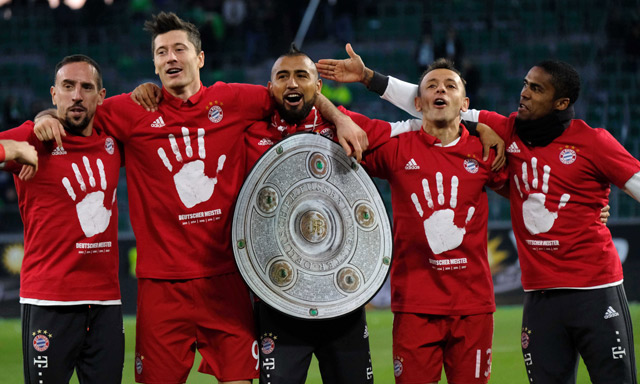 Bayern Munich claimed a fifth straight Bundesliga title. Photo: Peter Steffen/DPA
Here are five things we learned from the 31st round of Bundesliga matches this weekend:
1. Bayern party time
Their 6-0 hammering of Wolfsburg confirmed Bayern are Bundesliga winners again and the squad proved they are party champions too.
Captain Philipp Lahm kicked things off, taking to the loudspeaker to lead the singing on the pitch.
The squad wore red T-Shirts showing a white palm — a finger for each league title over the last five years.
The victory was toasted in the dressing room with champagne, beer and music.
“It was too quiet — we need a new sound system,” joked Mats Hummels.
Cans of beer and freshly delivered pizza joined the team on the flight back to Munich, where the celebrations continued in an Italian restaurant.
Defender Rafinha was the last man standing and he posted a bare-chested video on Instagram with a copy of the Bundesliga trophy and a glass of sparkling at 7am on Sunday.
Bayern will be presented with the real Bundesliga trophy after the last league match, at home to Freiburg, on May 20.
2. Leipzig made to wait
RB Leipzig's plans to beat strugglers Ingolstadt at home and celebrate winning an automatic Champions League place fell flat in Saturday's goalless draw.
Last December, second-from-bottom Ingolstadt ended RB's record 13-match winning run at the start of their first Bundesliga season with a 1-0 defeat.
The Bavarians struck again at Leipzig's Red Bull Arena in a bad-tempered affair.
There were seven yellow cards and Ingolstadt defender Alfredo Morales was sent off late on for a second booking.
Leipzig's top-scorer Timo Werner had to go off on 66 minutes with a leg injury.
RB's Champions League celebrations must now stay on ice until their next home game — against Bayern on May 13.
3. Rivals' showdown
Borussia Dortmund drew a blank in their goalless draw with Cologne, but are relishing Saturday's home match against Hoffenheim — a showdown between the rivals for an automatic Champions League place next season.
Hoffenheim's 1-0 win against Eintracht Frankfurt on Sunday saw them leap-frog Dortmund into third, with Borussia just one point behind.
The team which finishes third in Germany's top flight qualifies directly for the Champions League while fourth goes into a play-off.
“It's great for everyone, when the third plays fourth,” said Dortmund midfielder Gonzalo Castro.
“We're looking forward to it and the good thing is that we have things in our own hands,” he added before the home clash at Dortmund's Signal Iduna Park.
4. Second chance for Kruse
Max Kruse is set to feature for Germany at the Confederations Cup after hitting 10 goals in his last eight games for Werder Bremen.
He scored in Saturday's 2-0 win against Hertha Berlin in a week when Germany's head coach Joachim Loew praised the 29-year-old's prowess in front of goal.
Loew kicked him out of the Germany squad in March 2016 for off-the-field indiscretions, but the signs indicate Kruse is set for another chance.
“I'm glad, honoured even, that the national coach has seen my performances,” said Kruse.
Kruse could taste international competition next season with sixth-placed Bremen set for a Europa League place.
5. Hot-shots do battle
Bayern are confirmed champions, but the race to be the league's top scorer rages on.
With three games left Robert Lewandowski's two goals at Wolfsburg leave him on 28 league goals — one more than Dortmund's Pierre-Emerick Aubameyang.
Lewandowski is looking to retain the hot-shot title he won last year with Bayern still to face Darmstadt (h), RB Leipzig (a) and Freiburg (h).
Aubameyang's Dortmund play Hoffenheim (h), Augsburg (a) and Werder Bremen (h) in their remaining league games.
By AFP's Ryland James