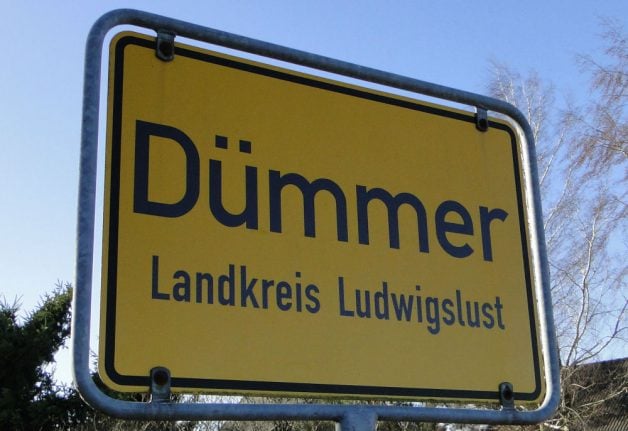 Whether the names got lost in translation over time, or someone back in time had quite a sense of humour, it's not always clear.

But you might start to feel sorry for the folks stuck living in these unfortunately named villages and towns – that is if you can ever stop giggling over the absurdity to feel such sympathy.

This tiny town (population about 260) in Thuringia would like you to know that it did not name itself after the famous German leather pants. Instead, the name stems from the town’s Slavic origins, when it was called Ludoraz, Ledeoratz or Ledoraz. The town speculates that the name probably came from a Sorbian ruler, and eventually morphed into what it is today.

Despite the fact that this town's name literally translates to “hate hole,” it's unique in that since the 1980s, it's been a key test market in Germany.

The Rhineland-Palatinate town, which is populated by around 21,000 inhabitants, was determined to be broadly representative of the entire population of Germany by statisticians who used a list of criteria including age, income and education.

Haßloch has thus established itself as “the most average place in Germany” where the Society for Consumer Research (GfK) believes that if products sells here, they will sell elsewhere in the country, too.

We've been tittering over Titting. We tittered even more to learn the Bavarian town was once split into Obertitting (Upper Titting) and Untertitting (Lower Titting). Because we're apparently 12, and the word Titte also conveniently exists in German.

The town has a long history, with evidence that people lived in the area as far back as 1000 BC. By 90 AD, the Romans had built the so-called “Limes Roads” to protect themselves against the “barbaric” Germans, according to the Titting website.

This town in Brandenburg has a quite unfortunate meaning in German: the verb kotzen means to vomit.

But the tiny town of 587 people explains that in fact, the name comes from its former Slavic inhabitants, possibly from the word cossa, meaning goat. But the other possible word its name was derived from is not much better than its current German translation: cossym, meaning “tuft of hair”.

Perhaps the name of this town would suggest you bring some tissues along on your visit to Feuchtwangen – literally “moist cheeks”. The town reports that the name somehow sprung from the term “moist meadows” – feuchte Auen.

This town south of Berlin even has a dedicated section on its Wikipedia page about the origins of its name, which translates to “breast town”.

The town itself explains that one theory behind the name is that during the Middle Ages, monks in the local church would do penance – Buße. The term Busen, or Meerbusen, can also refer to a bay, and the town explains that it once lay at the edge of a now dried up lake.

At 44 metres above sea level, it's quite flat. For something more hilly, you might want to head west to Busenberg (breast mountain) in Rhineland-Palatinate.

The town though says the name may come from a Franconian named Gelo, who built up the town and its church. Records of the town date back to 1170 and include previous spellings such as Gelenkirken and Gelenkirchen.

The translation of this town name isn’t nearly as hilarious as it sounds in English, but we thought we’d include it anyway. In German the verb wanken means to stumble or stagger, so it would be “stagger town”.

This 700-year-old town of less than 3,000 people in the north boasts three whole restaurants and/or cafes, according to its website, so you probably won’t actually do too much staggering there in a bar-hop.

Fick is the German f-word. Mühlen means mills. So the town is literally called “shag mills”, but ruder. The singular Fickmühle is also a slang term in some places for “dilemma”.

If you visit the official website, the town greets you by saying “We want to introduce our village here and explain how the name came into being.”

One funny observation is that when you click on the section called “history”, all they have is an antique-looking map with the words: “History. We would be happy to have further information and suggestions”.

We hope the residents of this town in Saxony-Anhalt aren’t as miserable living there as the name suggests: The noun Elend in German means misery, wretchedness or unhappiness.

The village actually lies within the Harz mountains and is a favourite spot for nature-lovers hiking to the top of the Brocken mountain.

Often paired with Elend, this town with a meaning of “worry” is also located in the Harz mountains. And the name Sorge also comes from a Middle German word for border, Zarge, according to Die Welt.

Located in the northern state of Mecklenburg-Western Pomerania, this town is not alone in its unfortunate name, meaning “dumber”. There’s also a lake in Lower Saxony called the Dümmer lake.

According to the town website, the name comes from the Slavic word domare, which means “those from the house have glory”.

With a combination of the German verb rammeln and the noun Bach, this town name would roughly translate to “screwing creek”.

Located in Rhineland-Palatinate, the town was first mentioned in 1364 as “Ramelspach”, according to Die Rheinpfalz newspaper. Another town with an unfortunate reference to coitus, broken down into the verb poppen, and the noun Weiler, Poppenweiler literally translates to something like “humping hamlet”.

Now a district in the city of Ludwigsburg, Baden-Württemberg, the original village name was recorded in 1122 as Bobbenwilare. The city speculates that the name could reflect how a local aristocratic family named many of its male members Boppo or Poppo.

The name could have also been derived from an Alemannic clan leader named Boppo.