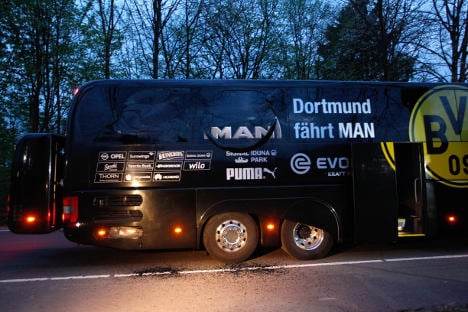 With Dortmund players due back on the pitch in the Bundesliga, police are pursuing leads regarding the attack on Tuesday that injured Spanish international Marc Bartra and a policeman.

Three bombs containing pieces of metal detonated minutes after the bus left the team's hotel for a Champions League match against Monaco.

The Tagesspiegel newspaper revealed it had received a new claim, apparently from far-right circles, railing against multi-culturalism, saying it had been behind the triple blast and threatening another attack.

“We have the letter claiming responsibility. We are examining it,” said Frauke Koehler, spokeswoman for federal prosecutors, referring to the email received by Tagesspiegel.

Several such claims have already been investigated without any breakthrough.

Three identical letters found close to the site had initially suggested an Islamist link, but questions have arisen about the authenticity of that claim.

A sole suspect – an Iraqi man – taken into custody over the Islamist link has since been cleared of involvement and a second claim, purporting to be from the far-left, was made online, but prosecutors had cast doubt on it early on.

Technical expertise is required to handle the detonator, which is not easily obtained, added the sources.

A spokeswoman from the federal crime bureau BKA would not confirm the report, saying it was “much too early” to pinpoint the origin of the explosives.

“The investigations are continuing in all directions and are running at full-speed”, she said, adding that about 100 officers were participating in the probe.

Dortmund players were badly shaken by the attack, but nevertheless played their delayed first leg quarter-final match against Monaco on Wednesday, losing 3-2 to the French club.

Bartra, who had to undergo a wrist operation, left hospital on Saturday, but will be out of action for about four weeks.

The club's chief executive Hans-Joachim Watzke said he thought about pulling Dortmund out of the Champions League following the attack before resolving to not cede to the bombers.

“I briefly asked myself if we shouldn't withdraw completely from the competition, but that would have been a victory for those responsible for the attack,” he told Saturday's edition of Spiegel weekly.

The team is gearing up to host Eintracht Frankfurt in the Bundesliga on Saturday, when six other league games are also to be played under heightened security.

Dortmund urged fans to turn up early due to security checks, and asked them to avoid bringing bags or backpacks.