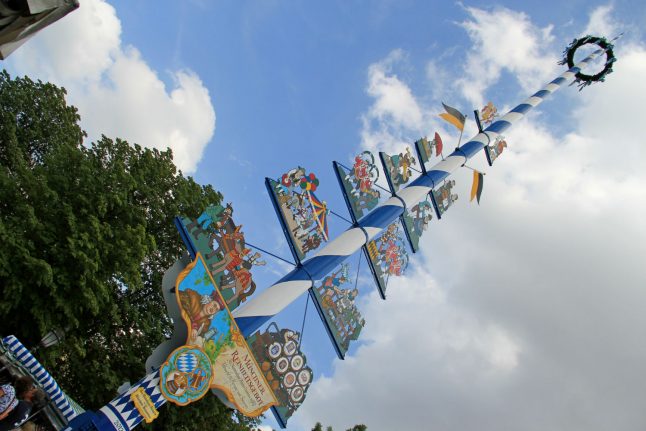 “That was the high point of our careers so far,” Stephan Huber, chief thief of the men’s club in Neufinsing, told the Münchener Tageszeitung (TZ).

That itself seems like something of an understatement. According to TZ, the boys from Neufinsing did something that had never been done before – they stole Munich’s maypole.

On Monday night Huber and his gang from the town of 4,300 inhabitants managed to steal the maypole that is set to be erected on May 1st in Viktualienmarkt, one of the main squares in central Munich.

After teaming up with residents of the towns of Hohendilching and Ismaning, both of which lie on the outskirts of Munich, the Neufinsing crew snuck into the warehouse where the maypole was waiting to be painted and crept out with their prize, before loading it onto a trailer. They then pulled it back to home turf on a tractor.

The location of the pole was supposed to be a highly guarded secret, but the Neufinsing crew acted on a tip to nab it.

The German Maibaum (maypole) is generally erected on May 1st, a day of celebration across the country. Residents in Bavaria, Baden-Württemberg and elsewhere celebrate this originally pagan ritual each year within their local communities.

The excitement comes when the towns try to raid their neighbours' villages to steal their tree and take it back as a prize. And the traditional reward is a meal washed down with beer.

On Tuesday evening representatives of the Neufinsing men’s club met with the Munich Brewers’ Club to lay down their terms for the return of the felled tree.

After hard negotiations, the fleet-handed villagers agreed to give the maypole back for the price of two hearty meals accompanied by some of Munich’s finest beer.

They will get the first meal when they give the pole back and the second when it is erected om May 1st.

The demand for a life-long private table at Oktoberfest was however turned down by the Munich brewers’ club, who sponsor the city maypole.

“Tradition is what counts – and that includes the risk that the maypole will be stolen. We have to respect that,” said Andreas Steinfatt, head of the Munich brewer’s club in a statement.

“It’s good that there are still those lads out there – the ones who make the maypole and also the ones who steal it,” he added.

“Now we’re looking forward to the May Day celebrations.”