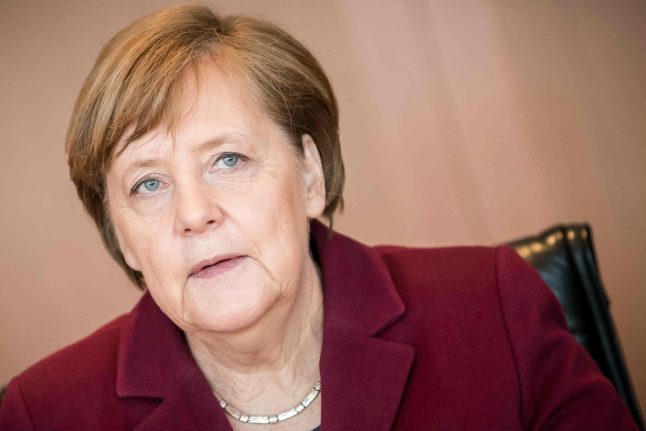 “After the chemical weapons massacre of April 4th on Khan Sheikhun in northwestern Syria, a military installation of the Syrian regime was destroyed by a US air strike last night,” they said. “President Assad bears sole responsibility for this development.”

Merkel had said on Thursday that there were indications that the Syrian regime was responsible for the suspected chemical attack which left scores dead.

“Unfortunately, there are elements showing that it came from the Assad regime,” Merkel told reporters during a visit to the town of Bad Muskau in eastern Germany, according to a spokesman.

Earlier Thursday the regime of Syrian President Bashar al-Assad, along with its ally Russia, rejected growing international accusations that Damascus was behind the attack in which at least 86 people were killed.

Merkel said it was “scandalous” that there had been no UN Security Council resolution on the suspected chemical attack in which 27 of the victims were children and a further 546 people were injured.

Britain, France and the United States circulated a draft resolution following the strike on Tuesday on a rebel-held town in Idlib province in northeast Syria.

German Foreign Minister Sigmar Gabriel said on Friday that the US air strike was “understandable”, but urged a political solution to the conflict.

“The fact that the United States has now reacted with a strike against military sites of the Assad regime, from which this cruel war crime was perpetrated, is understandable,” said Gabriel.

“It was difficult to bear that the UN Security Council was unable to clearly and unequivocally respond to the barbaric use of chemical weapons against innocent people in Syria,” he said in a statement.

“Poison gas is an internationally outlawed weapon. On this the world community agrees,” added the statement, released while Gabriel and his French counterpart Jean-Marc Ayrault were visiting the West African country of Mali.

“As understandable as the US military strike against the military infrastructure was after the failure of the UN Security Council, it is now crucial to launch a joint peace effort under the umbrella of the UN.

“We must now fully support the work of the United Nations to achieve a political solution to the civil war.

“Only a new and democratic Syria will bring lasting peace,” he added, stressing that Europe and Germany supported such an outcome.

“The terrible events of the last few days show that the regional parties to the conflict as well as the US and Russia are needed for this.”