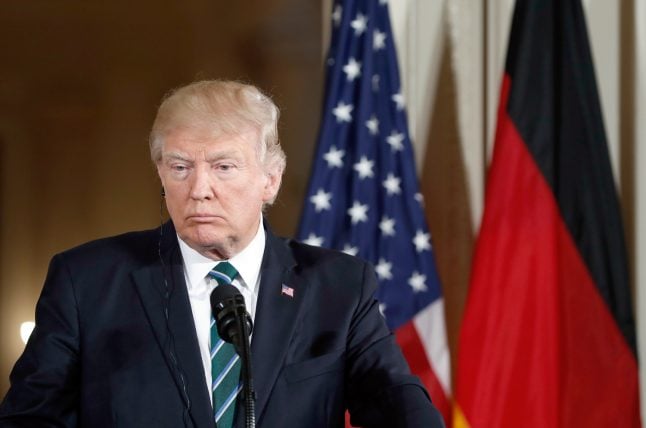 More than half of Germans (55 percent) don’t think Trump will last as president for his entire four-year term, according to a survey released by YouGov on Monday. The opinion research group polled more than 1,000 people between February 20th and 23rd.

Most Germans polled have generally voiced negative views of Trump since before the November election, when another YouGov poll days before voting day showed 65 percent of Germans said they would feel “afraid” if he became president. Then in a Civey poll released on inauguration day, most Germans described Trump as either “dangerous”, “unpredictable”, or “irresponsible”.

It appears those sentiments haven’t changed in the latest survey on Monday.

The survey showed that Germans thought of Trump as extroverted and neurotic, and not very agreeable.

Older Germans felt particularly stunned by Trump’s first measures as leader with about half of those 65 and older saying they felt surprised in a negative way, compared to 26 percent of those aged 18 to 34.

Supporters of the far-right AfD party, which has long been supportive of Trump, had comparatively better things to say about the Republican leader, with 28 percent of them saying they were pleasantly surprised by his administration thus far.

Just 10 percent of those surveyed said that his leadership style is normal and close to that of prior US presidents.

Germans were especially critical of how Trump has impacted the reputation of the United States on the global stage in areas like environmental protection, health care, press freedoms and equal rights.

In foreign affairs, 29 percent of Germans said they could see him having a positive impact on fighting terrorism. But at the same time, another 56 percent said they thought he would negatively influence the stability of international security. And separately, 62 percent said they feared his leadership would deal a blow to the cohesion among different nations.

The survey also asked whether respondents thought it would be possible for someone like Trump to make it into the German government. About two-thirds (64 percent) said this wouldn’t happen, while another one-fourth said it certainly could.

But would such a German version of Trump be good for Germany? Two-thirds of respondents said “nein”, while 17 percent would welcome such a candidate. Again, AfD supporters were more eager for their own Herr Trump, with 62 percent saying this would be good.

Still, when asked about some of Trump’s specific policies, the survey showed a different picture. More than half (59 percent) seemed to lend support to Trump’s America First platform, saying that it was a legitimate goal for a government to place their own country's’ interests above all else.

Another 53 percent said that countries should close their borders to people from certain nations if this action is deemed necessary.

Trump has also given NATO allies like Germany a hard time for not spending as much on defence, which can be a hard sell to the country’s comparatively pacifistic population. Less than half (42 percent) of Germans said they believed having strong military might is essential for establishing a country’s interests in other countries.