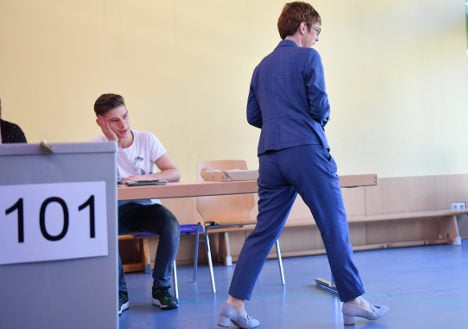 Although the state bordering France is home to just one million people, its vote half a year before national elections is seen as a test of the Social Democrats' rising fortunes under new leader Martin Schulz.

The SPD, having long played second fiddle to Merkel in a national right-left grand coalition, has been re-energised since the folksy and plain-spoken Schulz became its chairman in January.

The former president of the European Parliament has lifted party support by 10 percent with promises to help the socially disadvantaged and end Merkel's almost 12-year reign in September elections.

The “Schulz mania” has seen younger voters flock to the more than 150-year-old workers' party, which is now polling neck-and-neck at the national level with Merkel's conservative bloc.

The SPD is currently the CDU's unhappy junior partner in Saarland and in the national government – and in both cases hopes to grab power by teaming up with other leftist parties.

Even if the CDU comes out ahead in Saarland, the SPD could potentially seek a coalition with the far-left Linke and possibly the ecologist Greens parties – a so-called “red-red-green” alliance.

The same trio is now running the city-state of Berlin, although policy hurdles remain at the national level, given that the Linke, for example, rejects German membership of Nato.

In Saarland, the latest poll for broadcaster ZDF gave the CDU a clear lead at 37 percent over the SPD's 32 percent, with the SPD's potential ally the Linke scoring 12.5 percent.

The incumbent is popular CDU premier Annegret Kramp-Karrenbauer, 54, often dubbed simply “AKK”, who is considered pragmatic and unpretentious, dressing up as a cleaning lady at carnival festivities.

Her SPD challenger is deputy premier Anke Rehlinger, 40, who happens to hold the state record in shot put (16.03 metres).

Polls opened at 0600 GMT, and about one third of eligible voters had cast their ballots by 1200 GMT, slightly more than in 2012 elections, suggesting turnout for the day could be higher than the 62 percent five years ago.

First projections by public broadcasters were expected shortly after polls close at 1600 GMT – although talks to forge a governing coalition could then take days or weeks.

While Merkel long seemed invincible at the ballot box, she has been weakened by a backlash against her decision to open German borders to refugees which has brought in a million asylum seekers since 2015.

This has boosted the anti-immigration Alternative for Germany party which, despite a recent dip in popularity, already has a presence in 10 of Germany's 16 state assemblies. It is expected to add an 11th in Saarland on Sunday.

As the refugee crisis has abated, the campaign race is increasingly being fought along traditional ideological lines.

While Merkel broadly argues that Germany, the EU's export engine, is prosperous and needs to stay competitive to keep it that way, Schulz points to the army of “working poor” and promises to narrow the wealth gap.

Schulz also vowed that, if elected chancellor, he would work to strengthen the EU, equalise pay for female workers and give half of his party's ministerial posts to women, in an interview with Bild am Sonntag newspaper.

On the Saarland election, he vowed: “We want to be the strongest party. And we want Anke Rehlinger to be state premier. And then we want to change things … We have fought till the last minute, I am very confident.”

Merkel, 62, has warned local voters that “red-red or red-red-green experiments should be avoided” and urged them to stick with the CDU's “path of success”.

Saarland, though small, in some ways reflects bigger economic challenges. The former coal region, where the last mine closed in 2012, has sought to establish itself as a research and IT hub.

Predominantly Catholic Saarland, occupied by France after World War II, has since the mid-1950s been ruled by the CDU, alone or in coalition, except for the 1985-98 reign of former SPD premier Oskar Lafontaine.

Lafontaine, who later defected to the Linke party, has campaigned with posters that promise “We've paid enough — now it's the turn of the rich”.