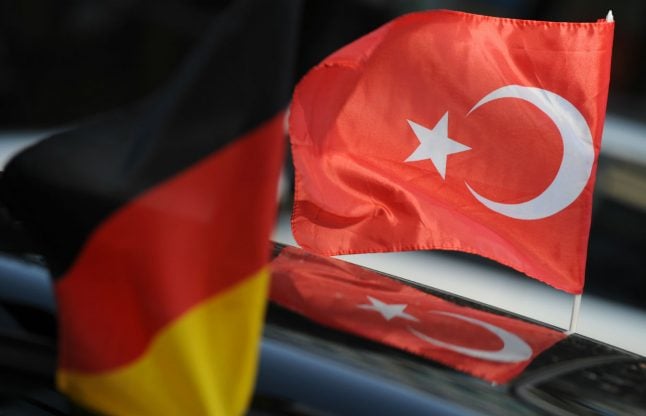 The presence of more than three million people of Turkish origin in Germany – the biggest Turkish diaspora in the world – means that Berlin and Ankara currently seem like parents forced together by a common child: Ankara is demanding visiting rights, but Berlin doesn’t think they are responsible enough to be left alone with the kid.

Turkey's bitter response – accusing Germany of acting like Nazis – has been the international relations equivalent of telling your soon-to-be ex-spouse “you're just like your f'ing father”.

And yet just a little over a year ago, Germany had pushed through an EU deal with Turkey on refugees which looked set to restart Ankara's long-stalled ambition to join the European Union, while simultaneously ending a migration crisis which was threatening to split Europe apart.

So how did it come to this?

The comedian in question, Jan Böhmermann, was suddenly facing up to a five-year jail sentence.

But the poem didn't come out of nowhere. A few days before Böhmermann recited it, German media reported that Turkish officials had asked their German counterparts to remove a satirical song about Erdogan from the website of public broadcaster ARD. Böhmermann's poem was an attempt to show Erdogan what real slander was, so the comedian said.

A panicked German government went into damage control, with Angela Merkel calling up the Turkish PM to tell him that the poem had been “deliberately insulting.” She then allowed prosecutors to investigate Böhmermann – a decision the comedian said was as good as serving him up on a plate to Erdogan.

Luckily for the comic, German state prosecutors dropped the case in October, saying that the poem was not necessarily slander, due to the satirical context in which it was set.

Erdogan did have more success in his private case against Böhmermann, though.

In February, a Hamburg court banned the comedian from reciting large parts of the text, saying that the Turkish leader “does not have to accept insults or verbal abuse”, even if the offensive passages were clearly not intended to be taken seriously.

Almost from the moment the refugee deal was signed on March 18th 2016, both sides started accusing the other of not sticking by promises.

By November, Erdogan had threatened to open Turkey's borders again after the European Parliament voted to back a freeze in EU membership talks with Ankara.

The first real diplomatic dent in the deal was a spectacular own goal by the German diplomat heading the EU mission to Ankara in May.

Hansjörg Haber allegedly told journalists of the pact, “We have a saying 'Start like a Turk and end like a German. But here it is the other way round'.”

The German diplomat was summoned by “indignant” Turkish officials who said he had insulted Turkish honour. Haber promptly lost his job.

In early June last year, German lawmakers voted resoundingly to recognize the massacre of Armenians by Ottoman Turkish forces during the First World War as genocide.

Turkey warned in the build-up to the vote that it would be “a real test of the friendship” between the two nations, and followed through by immediately recalling its ambassador after the vote results came through.

A clearly wounded Erdogan’s rhetoric began to harden for the first time. He asked how German officials could look Turkey's leaders in the face, while angrily charging that the 11 German lawmakers with Turkish roots who backed the vote should undergo “blood tests” to see “what kind of Turks they are”. As well as threats to open the floodgates for refugees, the other ace in Turkey’s hand has been the air base in southern Turkey that Germany is using in the fight against Isis.

German Tornado and refuelling jets are based at the Incirlik air base in southern Turkey and plans put forward in 2016 to invest upwards of €60 million in the base show the strategic importance it has to the Bundeswehr (German army).

But this strategy was thrown up into the air after the Armenian genocide vote, as Turkey denied German politicians the right to visit troops at the base – a move which Berlin warned could lead to it pulling out of the mission against Isis.

When Merkel said in September that the Armenia resolution had been “non-binding”, she was accused of distancing herself from the vote – at which she had not been present – to smooth down the fight over Incirlik.

A month later, Ankara backed down, allowing six German lawmakers to visit the base.

After a failed military coup in Turkey in July, the government has cracked down heavily on opposition forces it claims are a threat to the country’s democracy.

Germans with Turkish roots have become caught up in the reprisals, a fact that has become a sore point in German state visits to Turkey.

In September, German media reported that six Germans had been unable to leave Turkey since the failed coup, with Ankara claiming they were linked to Fethullah Gülen, the Islamic preacher who Erdogan says was the mastermind of the putsch.

But the most explosive detention came in February when Deniz Yucel, Turkey correspondent for German newspaper Die Welt, was jailed on terror charges after he wrote an article about the Turkish Energy Minister, who is also Erodgan's son-in-law.

The arrest of the dual national caused outrage among the German public and led Berlin to call in the Turkish ambassador “for talks.”

Since the arrest of Yucel, an already bitter atmosphere has soured completely.

Erdogan is seeking to extend his powers as president via a referendum to be held in April, and had hoped to rally support among Turks in Germany by sending ministers over to give public speeches.

The German government has insisted that it had nothing to do with the decisions. But judging by the verbal volleys being fired from Ankara, it is clear Turkey doesn't buy this.

Erdogan and several of his ministers have repeatedly accused the German government of using “Nazi tactics”.

The Turkish President has also claimed Germany is supporting terrorists, referring to the Kurdish independence movement, which marched peacefully in Frankfurt on Saturday. Many protesters at the march carried banners supporting the Kurdistan Workers Party (PKK), a group Germany views as a terror organisation.

Germany has reacted with consternation at the Nazi accusations, with Merkel saying they must stop. But at the same time, Berlin is desperate not to aggravate Turkey even further, repeatedly calling for calm.

So where is this roller coaster relationship headed in the next 12 months? One thing is for sure: if things are to get better, the counselling session are going to be pretty expensive.