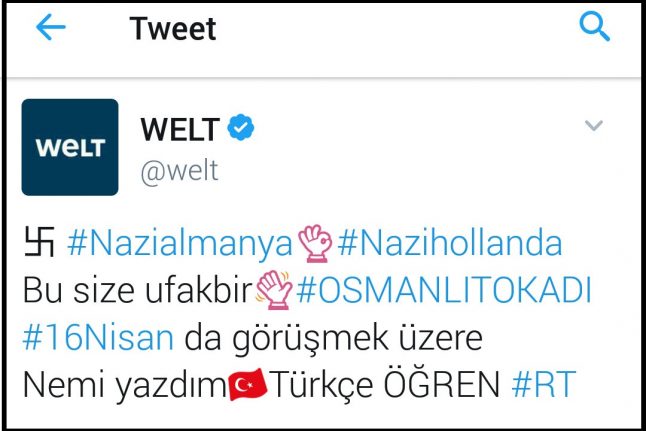 The tweet at around 8.30am showed a swastika and then the hashtag #Nazialmanya and #Nazihollanda – meaning Nazi Germany and Nazi Holland in Turkish. The tweet also mentions the April 16th referendum that would expand President Recep Tayyip Erdogan's powers.

The message linked to a video of various clips of Erdogan speaking with upbeat music, and the tweet ended with the words “learn Turkish”.

The tweet has since been removed from Welt’s Twitter page and the newspaper later confirmed in a report that it had been hacked, but it was not the only account to be attacked.

Thousands of Twitter accounts had similar messages posted, according to DPA, including the accounts of German tennis star Boris Becker, Stockholm University, football team Borussia Dortmund, and Amnesty International. The hack seems to have been possible through the third party app Twitter Counter, which gives users social media analytics.

Twitter Counter confirmed in a post that they were aware their service had been hacked and have launched an investigation.

“We've already taken measures to contain such abuse,” they wrote.

We're aware that our service was hacked and have started an investigation into the matter.We've already taken measures to contain such abuse

“Assuming this abuse is indeed done using our system, we've blocked all ability to post tweets and changed our Twitter app key.”

The Dortmund team later thanked followers for alerting them to what they said “obviously was the result of a severe attack from the outside”.

Thanks for all your hints! We immediately deleted the tweet, which obviously was the result of a severe attack from outside.

Die Welt has been caught up in the ongoing dispute between the Berlin and Ankara governments after its reporter, Deniz Yücel, was arrested and jailed in Turkey last month.

Most recently tensions have risen after several German and Dutch towns blocked rallies set to be held by Turkish leaders promoting the referendum, and the state of Saarland banned foreign officials from campaigning.

Turkey lashed out, accusing Germany of being undemocratic with Erdogan comparing it to Nazi times.

In an interview on Wednesday, Chancellor Angela Merkel’s chief of staff warned that the country could consider banning Turkish politicians from entering Germany.

Die Welt’s sister paper, Bild, published a damning front-page editorial on Wednesday against Erdogan branding him a persona non grata and accusing him of “endangering Europe's stability through his lust for power”.

“Bild tells the truth to Erdogan's face – you are not a democrat! You are hurting your country! You are not welcome here!,” the tabloid-style newspaper wrote in the article, which seems to have stirred up debate among Turkish-speaking Twitter users.

The outburst was accompanied by an article headlined “the little man from the Bosphorus”.

There are about 1.4 million eligible Turkish voters in Germany, thus Erdogan's government is eager to tap the diaspora vote in the April 16th referendum.

German Interior Minister Thomas de Maiziere said Ankara was playing the role of the victim with its broadsides against NATO allies, as it seeks to galvanize support.

With AFP and DPA.