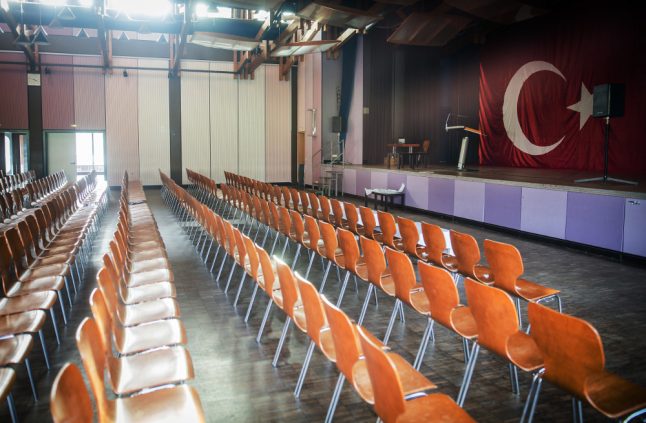 The stage where the Turkish minister was set to speak in Gaggenau. Photo: DPA.

The Turkish government also on Thursday summoned Germany's ambassador to protest the cancellation of the rallies.

Turkey's Justice Minister Bekir Bozdag had scrapped his visit to Germany after the authorities blocked a rally where we was set to speak to the Turkish community in Gaggenau, Baden-Württemberg, late on Thursday.

Bozdag was also scheduled to meet his German counterpart during his visit.

“Our discomfort and our reaction to these developments have been communicated in person to the German ambassador who was summoned this evening to the (foreign) ministry,” a senior Turkish official said on condition of anonymity.

The new row adds to tensions between Turkey and Germany over a number of disputes including Ankara's provisional detention of a German journalist on terrorism-related charges.

“That meeting with (the German justice minister) will not take place. I will return to Turkey,” Bozdag said while on an official visit to Strasbourg, in remarks carried by N-tv.

The move comes after Gaggenau authorities withdrew an earlier agreement with the Union of European Turkish Democrats (UETD) to hold a rally, with Bozdag as the guest speaker, saying that the hall did not have the capacity to host so many people.
“Because the event is now known across the region, the city expects a large number of visitors. However, the Bad Rotenfels hall (in Gaggenau), parking lots and access road are insufficient to meet that demand,” the town's authorities said in a statement.
“Due to these reasons, the hall rental agreement with the UETD has been revoked,” it added.
'Building Berlin walls'
Bozdag condemned the move, claiming it smacked of hypocrisy.
“It is unacceptable that German authorities, who constantly lecture us about human rights, democracy, rule of law, free speech… do not tolerate a meeting organised by the Turkish community,” he said.
Turkish politicians including Prime Minister Binali Yildirim have sparked controversy over their visits to Germany to hold political rallies.
Germany is home to about three million people of Turkish origin, the legacy of a massive “guest worker” programme in the 1960s-70s, the biggest population of Turks outside of Turkey.
Erdogan's government is keen to harness their votes for the April 16th referendum, which would discard the post of prime minister for the first time in Turkey's history.
The Turkish government says the changes would bring stability while critics say the new presidential system would cement one-man rule in the country.
Separately, Cologne city authorities said they would no longer allow the UETD to use a hall on Sunday, when Turkish Economy Minister Nihat Zeybekci was expected to make a rally speech.
“The event can and will not happen there,” a spokeswoman for Cologne city authorities told AFP, citing difficulties in guaranteeing security at such short notice.
It was unclear if Zeybekci would be able to find an alternative site.
In a series of tweets, Turkey's EU affairs minister Omer Celik slammed the German authorities' move, saying it would be a “success for racists.”
“By behaving so, they (German authorities) are harming the bridges between the democracies and building ideological Berlin walls that cut off people from each other,” Celik wrote.
Relations between the two NATO allies Turkey and Germany have soured following a series of disputes since the failed coup bid to oust Erdogan last July.
An Istanbul court ordered Monday provisional detention for Deniz Yucel, 43, a correspondent of the German newspaper Die Welt, criticised by Chancellor Angela Merkel as “bitter and disappointing”.
Berlin's sharp criticism of Ankara's massive crackdown after the failed putsch has also irked Turkey.