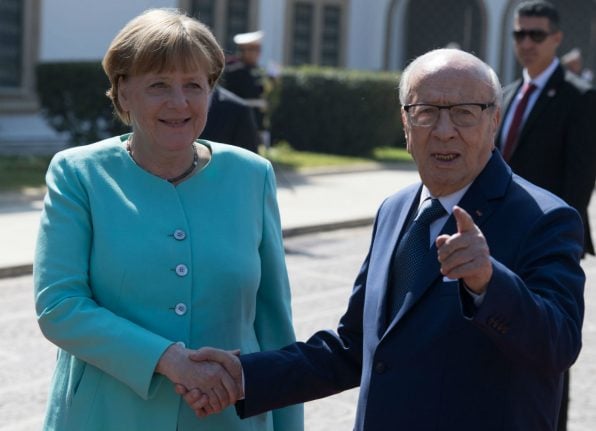 Merkel, on a two-day trip to North Africa that also included a stop in Egypt, said Germany and Tunisia had agreed on faster repatriations for rejected asylum seekers and job training for Tunisians.

The German leader, who faces elections in September, is under pressure to reduce the number of asylum seekers coming to her country, which has taken in more than one million migrants since 2015.

Merkel, who was also due to address Tunisia's parliament, has urged the North African states to step up border controls and speed up procedures to repatriate migrants whose asylum applications are turned down.

Germany has said that Tunisian bureaucratic delays meant it could not expel Anis Amri, the suspect in the truck rampage at a Berlin Christmas market that killed 12 people, even though his asylum application had been rejected six months earlier.

Merkel said that the two countries had agreed that questions from Germany on the identities of Tunisian asylum seekers will be answered within 30 days.

“We will also help Tunisia to set up a registration system. Replacement passports are then meant to be issued within one week,” she said at a joint news conference with Tunisian President Beji Caid Essebsi.

This agreement “will satisfy Tunisia and will satisfy Germany,” Essebsi said, adding that it concerned about 1,500 Tunisians whose residency requests have been refused by Germany.

“Measures will be taken in the Tunisian consulates in Germany to help in their identification,” Essebsi said.

Her talks also covered ways to respond to years of instability exploited by people smugglers in neighbouring Libya.

“We know the political situation in Libya is difficult,” she said, welcoming Tunisia's efforts to help resolve the turmoil.

“No-one is more interested in political stability in Libya than its neighbours, but I'll say, because of the migration issue, it's also important for us Europeans.”

The migrant issue had already been contentious in Germany where sexual assaults by large groups of mostly North African men on New Year's Eve 2015-16 against women in Cologne provoked outrage.

Merkel's interior minister floated an idea for North African countries to build holding centres for returned migrants but it was rejected by Merkel's centre-left coalition partners and rights groups.

The visit is also a chance for Merkel to pledge support for a country often hailed as a rare success story of the Arab Spring uprisings that shook the region and toppled autocrats including longtime Tunisian dictator Zine El Abidine Ben Ali.

Since its 2011 revolution, Tunisia has passed a new constitution and held free parliamentary and presidential elections.

But the nation faces high unemployment, social tensions and the threat from jihadists who have killed dozens of soldiers and police as well as civilians including 59 foreign tourists.

“The funds are for rural development, small and medium enterprises, but mainly for youths… who especially need job training and employment opportunities,” she said.

Her trip is part of a larger diplomatic push by the German leader, who last year visited Mali, Niger and Ethiopia.

She had also planned a trip to Algeria last week, but it was called off after President Abdelaziz Bouteflika fell ill.

Germany, which this year holds the G20 presidency, has also announced investment partnerships in Africa with the long-term goals of reducing poverty and deterring people from leaving.

Merkel was joined on her trip by a business delegation that could bring much-needed investments.