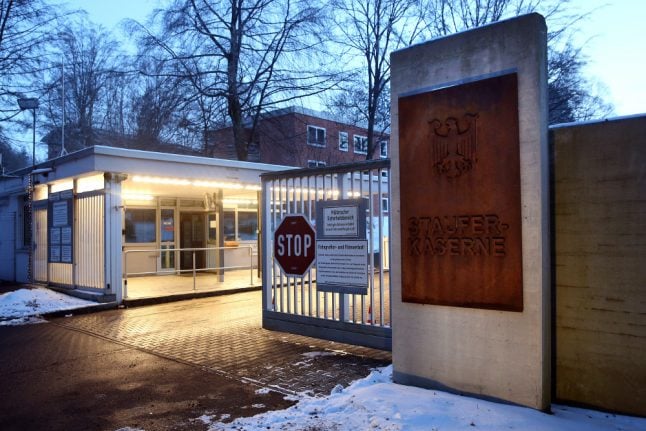 The entrance to the Pfullendorf barracks, where an investigation is currently underway. Photo: DPA.

The internal report seen by Spiegel and DPA describes a female soldier being forced by her trainers to pole dance and also separately being touched in intimate areas.

The report comes from the woman’s account of an incident last year at the Pfullendorf barracks, which has been the centre of scandal in recent weeks. The woman said that she was forced to undergo some kind of recruitment test where she had to dance against a pole in a common room.

She also said that throughout the training sessions, trainees were made to strip naked, and women were touched by trainers, not wearing any gloves, in intimate areas. The trainers then did a ‘smell test’ in front of the whole group. The trainers also had trainees sign a consent form, and took pictures which they said were for training purposes.

Internal research also found that the dancing pole had been installed and used regularly while soldiers were drinking. The report also noted that investigators had largely confirmed the woman’s account.

Seven soldiers have been suspended amid an ongoing investigation into grievous bodily harm against trainees, as well as false imprisonment, and sexual assault.

The investigation reportedly dates back to last October when a female lieutenant reported incidents directly to the Defence Ministry. The lieutenant described how she saw unbelievable scenes of recruits being forced to strip naked in front of their comrades, with trainers filming.

She also reported that trainers had forced the recruits to do exercises that served no purpose other than sexual ones, such as reviewing how to insert medical devices into the anuses of male and female recruits, which was also recorded.

According to Spiegel, these incidents have since been confirmed by further investigations.

The Bundeswehr (German military) also gave prosecutors a video depicting soldiers tied to chairs with bags over their heads being hosed down with water.

Defence Minister Ursula von der Leyen has called the reports “disturbing signs of a lack of leadership, morale and culture”.

Five of the suspended soldiers are to be dismissed, while another soldier is still being reviewed.